Mosaic in the Chora Church 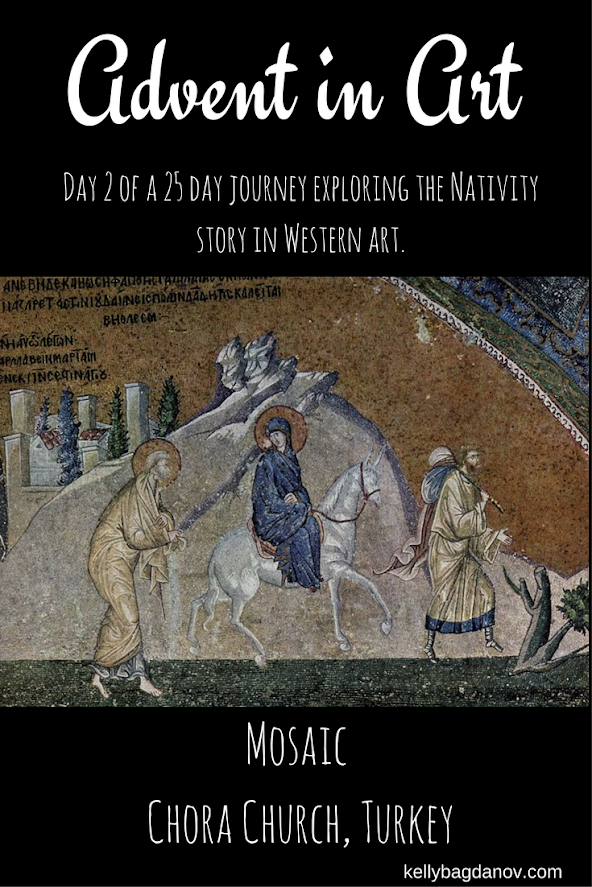 A mosaic in the Chora Church will be the focus of todays advent art. The mosaics and frescoes of the Chora Church are some of the finest examples of Byzantine art that have survived to our modern times.

History of the Church of the Holy Saviour in Chora

The Church of the Holy Saviour in Chora was a medieval Byzantine Greek Orthodox church when the frescoes and mosaics that decorate it’s interior were created.

The word Chora is translated ‘country’ or ‘field’. 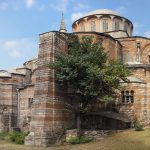 In the early 4th century the church, which was part of a monastery, was built outside of the walls of Constantinople, hence the designation of a church in the fields or country. In the late 5th century the walls of the city were rebuilt surrounding the church, however, the name remained. Undergoing several building programs, the building as it exist today was largely done in the 11th century, with the interior decorations completed between 1315 and 1321.

The interior of the church is decorated with frescoes and mosaics that were endowed, or paid for by the powerful statesman, Theodore Metochites. While we do not know the names of any of the artist who were employed, we can appreciate the devotional nature of their work. I am always awed by the beauty of these old churches. The prospect of painting frescoes or building mosaics on the domed ceilings without any of the modern conveniences we have at our disposal is impressive. 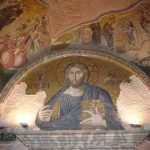 Much of the interior of the church is covered in frescoes, or paintings that are done directly onto wet plaster. Then as the plaster dries, the paint literally becomes a part of the wall. The mosaics are also formed in wet plaster. We are extremely fortunate that such permanent methods were used to decorate the interior of this church. 700 years old, these works have defied the odds and survived.

Following the fall of Constantinople to the Ottoman Empire in 1453, the Church was converted into a Mosque. As Islam prohibits iconic images the mosaics and frescoes had to be covered. Some of the works were covered with wooden shutters, and the majority with a layer of plaster. Additionally, frequent earthquakes had left many of the frescoes damaged, and presented a variety of challenges when restoration efforts were begun.

In 1948 the building became the object of a restoration program. Americans Thomas Whittemore and Paul Underwood from two institutes of Byzantine studies oversaw the restoration, and in 1958 the Chora church became a museum, and one of the finest surviving examples of Byzantine art.

In 2019, the government of Turkey declared that the museum would be converted back into a mosque and opened for prayers. Once again the frescoes and mosaics will be covered over, this time with fabric panels. The museum is currently still open and mosaics are still undergoing restoration.

Mosaic of Joseph and Mary traveling to Bethlehem

The mosaic we are examining is located in the outer narthex of the church. On the right side we see Joseph walking through a mountainous area. There is a city in the background and an inscription in the upper portion that reads, “and Joseph went up from the town of Nazareth in Galilee to Judea, to Bethlehem the town of David.”  The lower portion of writing reads, “And the angel of the Lord appeared to him in his dream, and said, Joseph, you the son of David, do not be afraid of accepting Mary as a spouse, for the one who has been born by her is the Holy Spirit.”

In the center of the mosaic we have Mary on a donkey, and in front of her is Joseph’s son. It was commonly held that Joseph had been widowed, and that there were children from his first marriage. This makes Jesus’s comments about brothers make sense.

In Christian art, particularly during the Medieval period, artists used a variety of devices to clue viewers in to the identity of the various figures in a painting. For instance, the Apostle Peter is painted with the keys of the Kingdom, while the Apostle Mark is painted with a winged lion or a book. The paintings in the church were meant to be clearly understood by the members of the congregation and to teach the stories of the Bible. In order to do that without words, a visual language of the church developed that was easily decoded by the intended audience.

Mary and the color blue

Color is often the device used to inform the viewer that the Virgin Mary is the female figure in a work. Mary is traditionally robed in blue, as we see here. There are multiple reasons for this.

The color blue is mentioned multiple times in the book of Numbers in relation to the people of Israel. Within the Catholic tradition the blue is related to Mary being the new Ark of the Covenant. When the people of Israel followed Moses out of Egypt and then into the wilderness, and after they were given the 10 Commandments, they were instructed to build the Ark, and place the tablets within. No man was allowed to touch the Ark and it was carried on poles. The presence of God was believed to dwell in the ark. The directions regarding the Ark are in Numbers 4, and in verse 7 we learn that the Ark is to be covered with a blue cloth.

Mary, being impregnated by the Holy Spirit now carries the divine within her, and so, for that time, God dwelled in Mary just as He did in the ark. This is why she is portrayed in blue. In fact, in the entryway of the Chora Church is another painting of Mary, sometimes referred to as ‘Mary as the Tabernacle’. In that picture Jesus is contained within her body demonstrating the concept that, for a time, Mary contained the uncontainable.

The color blue has an additional, or alternative meaning in the Byzantine/Orthodox church. In that tradition blue could be associated with mystery, divinity, and the sky making blue a heavenly color.

The color red, by contrast is the color of blood and is associated with humanity and the earth. Jesus is often wearing a red inner garment with a blue outer garment. This is because his divinity envelops his humanity.  Mary on the other hand wears a blue garment, sometimes with a red cloak. God (blue) dwells within her, and her humanity wraps around him. The interplay of these colors and the relationship between Mary and Jesus is a repeated theme throughout the art of the Chora Church.

So the iconography associated with the color blue in nativity artwork carries a significance that extends far beyond color choice.  We will see that on occasion artists have chosen another color for Mary, but when you are viewing a work with multiple women figures, and you are trying to determine which of them is Mary, you can generally pick her out based on her blue robes.

If you wish to read other post in this series you can find the links here.  If you are reading this during December of 2020 videos of each will work will be uploaded onto my https://www.kellybagdanov.com/lkg-essay/.

You can visit the my favourite subject essay for class 2 to view more of the mosaics and frescoes.

Albrecht Dürer’s Nativity Woodcuts Albrecht Dürer’s Nativity Woodcuts communicate complexity with nothing but lines, and it is astounding. Realistically representing space, emotion, perspective, with nothing but lines cut into wood amazes me with the delicacy he achieves. Dürer has always been my favorite artist and I’m looking forward to sharing some of his work with

Michelangelo’s The Holy Family portrays an intimate moment of the Holy Family done on a round panel and encased in an elaborate frame. The work, often referred to as the Doni Tondo, was completed just before Michelangelo began work on the Sistine ceiling and gives hints of Michelangelo’s movement toward Mannerism. The work shows the