In the sixth month the angel Gabriel was sent from God to a city of Galilee named Nazareth, to a virgin betrothed to a man whose name was Joseph, of the house of David. And the virgin’s name was Mary. And he came to her and said, “Greetings, O favored one, the Lord is with you!”  But she was greatly troubled at the saying, and tried to discern what sort of greeting this might be.

Welcome to day 5, I hope you are enjoying our journey. Yesterday we explored Duccio’s, ‘Maesta’. Today we move to one of Duccio’s students who is believed to have worked on portions of the Maesta.

Simone Martini was a Gothic painter who was heavily influenced by Duccio, and absorbed his use of color and harmony. Martini was also influenced by the graceful lines and delicacy of French Gothic Style. We can see both influences in his Annunciation painted for the Chapel of Saint Ansano in the Siena Cathedral.

The work was done in 1333 on a wood panel. You can read how panels were prepped here. The Annunciation is currently housed in the Uffizi in Florence.

The work is a tryptych, a work made on three panels. The panels are frequently attached with hinges and are meant to be viewed together. Tryptych’s were frequently used for altarpieces. In this case, art historians are not sure that the side paintings were originally viewed as they are now framed, but we do know they were meant to be viewed together. The saint on the left is Ansamo. This is the saint this chapel is dedicated to, and the saint on the right is Margaret.

The saints were painted by Martini’s brother in law, Lippo Mimmi, a celebrated artist in his own right, but we are not going to focus on the Saints today, but on the central panel.

The frame that the work is exhibited in is not the original. This ornate frame was made in the 1800’s, and can detract from the painting because it cast shadows onto the work, but the style is probably similar to the original frame.

Viewing a reproduction of an image is always difficult. First, you don’t get a sense of size, the colors are often off, and fine details don’t photograph well. I’ve included a picture of the altarpiece hanging in the Uffizi so that you can get an idea of just how large it is. The central panel is 10 feet wide.

The gold that you see on the painting is real gold and there is a lot of it. Remember, an altarpiece would be in a chapel without electric lighting. The gold was a beautiful reflective, luminous surface. The gold has punch work and has tooled designs that add to the ornate beauty. Much of this can be hard to see in photographs.

In the painting we have the angel Gabriel arriving on the left. We know that he has just arrived as his cloak still swirls behind him, and he is leaning and speaking to Mary. Gabriel’s head and neck are thrust forward into the center arch of the work, while his wings are framed by the left hand arch. Interestingly, the inside of Gabriel’s cloak is a plaid patter…Scottish angel???  Actually, there were many textile mills around this area, and plaids were known but very uncommon. All of the fabrics in the painting are luxurious and expensive, and the angel’s resembles some used in church vestments. 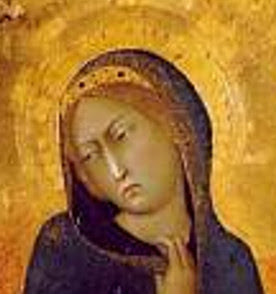 live leaves. The crown and scepter signify royalty, while the olive branch signifies peace, together they tell us that the Prince of Peace is coming. Additionally, the olive branch is associated with Noah. When Noah sent out the dove (the symbol of the Holy Spirit) and it returned with the olive branch it was a sign that God was now at peace with man, had saved Noah and his family.

Mary on the other hand shrinks back into the right arch, turning away, clutching her cloak. Martini has chosen to paint the exact moment that Gabriel has swooped into the room. This is Mary’s initial reaction to the angel appearing. She had been reading the Bible, and the book has dropped with her finger holding her place. Mary is almost always reading in paintings of the Annunciation.

Mary’s facial expression always reminds me of a sulky teenager. It’s hard to get past it. However, Martini has chosen to paint her right when the angel greets her, prior to her learning that she is to carry the Messiah. At this moment she is troubled, frightened, and suspicious…all reasonable reactions. Later in the story she comes to terms with the angel’s message and humbly submits. Making this painting of the annunciation so specific in time humanizes the Virgin at the start of her holy journey.

Her blue robe is a rich, deep tone of blue that flows in a curved, graceful line creating an elegant figure, who against the gold background, almost appears to be a cut-out. This effect highlights Mary as the central figure in the painting and our eye is drawn to her. She is seated in a chair, that resembles a throne. Around her head is a band of gold resembling a crown, that and the chair hint at her coming role as the Queen of Heaven.

These words on the painting are made more significant because the prayer ‘Ave Maria’ had been gaining use, so as a worshiper read the words on the altarpiece, they would also be reciting the prayer, the Hail Mary.

The punch work and tooling that is done into the gold leaf can only be appreciated when viewed close up. It is intricate, ornate, and beautiful, adding a bit of an engraved element.

The three arches are peaked, which was a feature of Gothic architecture that the artist has used to add height and elegance to the room Mary inhabits. The room is a shallow space with a beautiful marbled floor. Painting the effect of marble was something that Martini was known for, and he would often paint the back of his wood panels with marble.

Three windows, three arches are often used to signify the trinity. In the center arch we have the dove surrounded by cherubims. The dove is the manifestation of the Holy Spirit and we can see rays of light streaming out of the dove’s mouth straight at Mary. This image is used to convey the moment of the conception, and we will continue to see similar images in other Annunciations. The round space above the center arch is believed to have had a painting of God the Father. So the trinity would be present in this painting. God the Father looking on from above, the Holy Spirit in the form of the dove, and Jesus, now inside of Mary’s womb.

These old paintings give me much to ponder, I hope they do you as well.

Continue the Advent in Art Journey – Day 6 Book of Hours

Compare 4 works of art from the Italian Renaissance with 4 works from the Byzantine era to begin building the framework we will build on in future lessons. This download will introduce you to the overview portion of the Grand Tour Art History Curriculum

Saint Jerome in His Study by Albrecht Dürer

I also have the analysis of Albrecht Dürer‘s engraving, Saint Jerome in His Study, at the end of this post in a video format. If you prefer videos be sure to check out and subscribe to my You Tube Channel. Dürer is often referred to as the DaVinci of the North, a true Renaissance man

Quick color crash course. Color is one of the foundations of art, and  so we need a basic understanding of color theory. For thousands of years artist and craftsmen have been passing down their knowledge of color and how to use it effectively.  In the 1660’s Isaac Newton began experimenting with light and prisms, and

The Giotto Arena Chapel Nativity is the subject for day 3 on our Advent in Art Series. And so it was, that, while they were there, the days were accomplished that she should be delivered. Luke 2:6 Background of the Giotto Arena Chapel In a Northeast corner of Italy is the city of Padua. Even