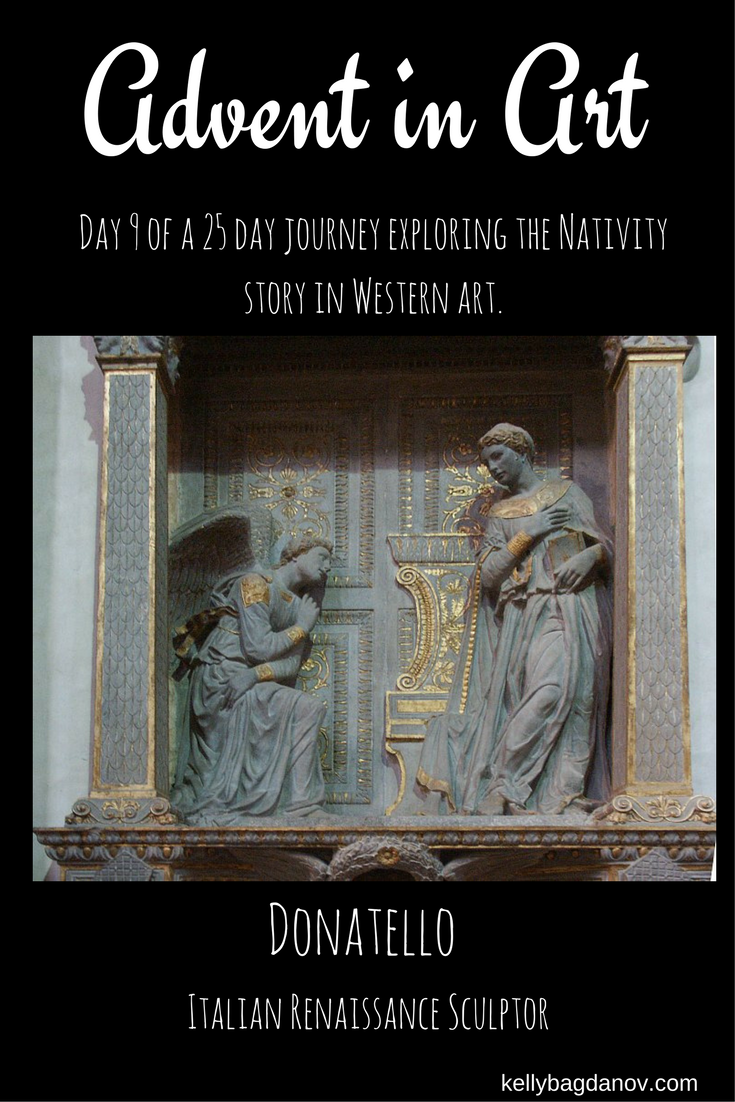 Donatello’s Annunciation is the focus of today’s post. I’m excited that today we get to examine a work by one of the esteemed Ninja Turtles. I have four sons and the Ninja Turtles hold a special place in my heart because my son’s started checking out books from the library about the artists the Turtles were named after. Huge win for this mom.

Born Donato di Niccolo di Betto Bardi, he is generally referred to as Donatello. (Thank Goodness!) Of the great High Renaissance Master’s, only Michelangelo outranks him. Donatello lived from 1386-1466, The other Ninja Turtles (sorry, can’t help myself) Michelangelo, Leonardo, and Raphael won’t show up on the art scene for nearly 50 years, and all will be indebted to the work Donatello did. 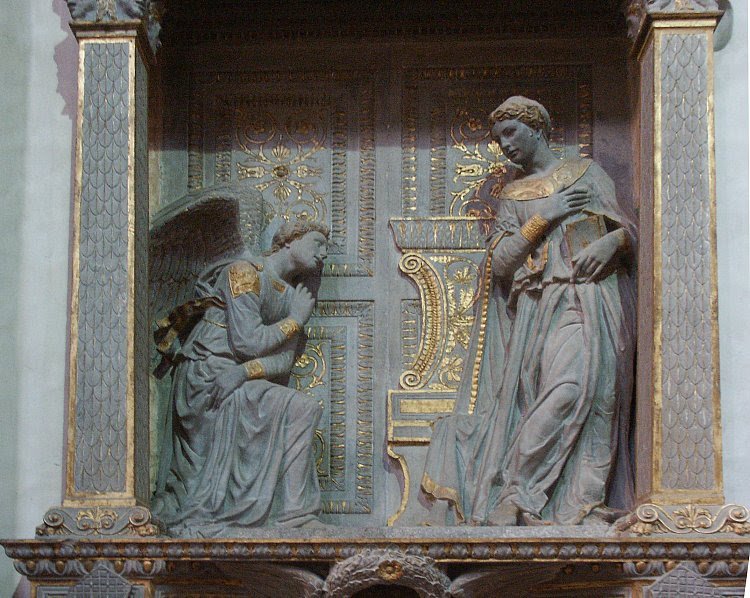 Donatello lived in Florence, and received excellent training in the workshop of Lorenzo Ghiberti.  Ghiberti was one of the most important early Renaissance sculptors and metalworkers, most famous for the bronze doors of the Baptistery of Florence. With that training, and his own genius, Donatello made his mark quite young, and had a long successful career.

Donatello was one of a cadre of artists in Florence gathered around the architect Filippo Brunelleschi. This group set out to create a new style of art. They had grown tired of the refinement of the International Gothic style and instead turned to nature, science and ancient Rome.  During this time period excavations were going on in Rome and new discoveries were being made daily. Brunelleschi and Donatello traveled to Rome to help, observe, and learn from the Roman sculpture and buildings that were being unearthed. They would return from the experience changed. Each would incorporate this new knowledge into future works.

This Annunciation, in many ways, is simpler than what we have viewed in this series so far. There are the two main figures without signs or symbols to communicate additional meaning. The Angel Gabriel has entered on the left, and has interrupted Mary reading. We see the book in Mary’s hand. However, Mary appears to be fleeing the frame, at least her body is. She inclines her head back, listening. It’s as if her body is going one direction, but her head another.

In the paintings we have examined, Mary has been graceful, serene, accepting. When one reads the Biblical account, on the surface that is how it appears. What that leaves out, at least to a modern viewer, is the frightening aspects of the news. Mary would instantly know that being pregnant put her life at risk. She was betrothed to Joseph, a legally binding contract, and he knew that she had not slept with him. The law said if he finds her not to be a virgin he is to bring her back to her father’s house where the town could stone her.

Her position is truly precarious. How does she tell Joseph, or her parents, that she is miraculously pregnant. When Joseph learns he doesn’t want her harmed, and thinks to divorce her quietly, but God intervenes in a dream and tells Joseph that Mary is pregnant by the Holy Spirit and that she will deliver the Messiah. Even with Joseph’s support, her position in her community would be severely compromised. Upon hearing the angel’s pronouncement that she would bear a child, she must have been full of turmoil. One part of her wanting to flee, one part knowing she can’t. Her response of, “Behold, the handmaid of the Lord, may it be done to me according to your word” is one of great faith and strength. She was going to need both.

A Re-Imaging of the Familiar Story

Donatello appears to have re-imagined the story. In this presentation we have Gabriel kneeling, this shows respect and elevates Mary’s status. Gabriel’s head is tilted, one hand up, as if he knows he is delivering shocking news, so he looks gentle and concerned. Mary appears somewhere between stunned, thoughtful, and desiring escape. One imagines this is the moment she has just heard the news, but before her full acceptance of it.

To an audience used to clear, graceful representations of the story, even this bit of hesitancy on Mary’s part would have been a bit of a shock. Our modern mind is fairly shock proof, but in this era where traditions were strong, and forms of communication limited, any changes in traditionally told stories was noted.

If we look more closely at Mary’s robe, we can clearly make out her leg under that drape. This is a direct result of the exposure Donatello had to sculpture while he was in Rome. In classical sculpture the human body was considered the pinnacle of beauty and they celebrated it. Her leg has been foreshortened, which causes it to look a bit to short when viewed straight on. 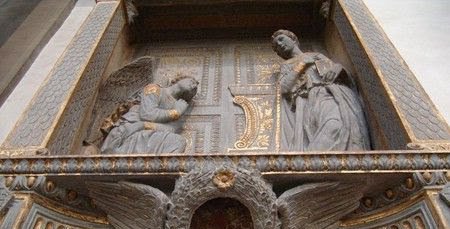 There is a term in art ‘in situ’, when an artist takes into account where a piece is going to be displayed. It might be a niche in a wall, an altar piece, or a sculpture in the round, but depending on where it is displayed the artist may have to address a variety of issues. Donatello took into account that this work would be viewed from below. Unfortunately, the only picture I could find that illustrate this are at a very extreme angle.

Donatello knew where the piece would hang and made several adjustments. The angel’s wing and head are adapted for the angle, as is Mary’s leg. The throne that Mary sits on, was also adjusted to not only take into account the angle from below, but how the frame juts out. Donatello needed to carve the throne in very low relief, that means not sticking out too far. So, to get the impression of a deeper space he uses Mary’s robe catching on the throne. You can see in the photo above, that this does add depth, but the throne still looks rather flat. From the correct angle the device works much better. Since it’s original installation the piece has been moved, which is why pictures of the work are straight on.

You can read this post to learn more about how the position of a sculpture affects how we respond to it.

Foreshortening is tricky. Artists during the Renaissance used a variety of  tools to help them in attaining a realistic rendering of people from a variety of angles. I’ve included this illustration by Albrecht Durer that shows how a grid could be used to help with the problems of foreshortening. Artist began to study the human body in their studios and workshops and they would ask models or other artists to pose for them. In this article I explained that during the Medieval period artists worked from pattern books. As we move into the early Renaissance artists are sketching from models and studying human anatomy more and more. Understanding how the body works and moves, and how it looks from different angles, allows the artist to render more realistically the attitudes they want to portray. 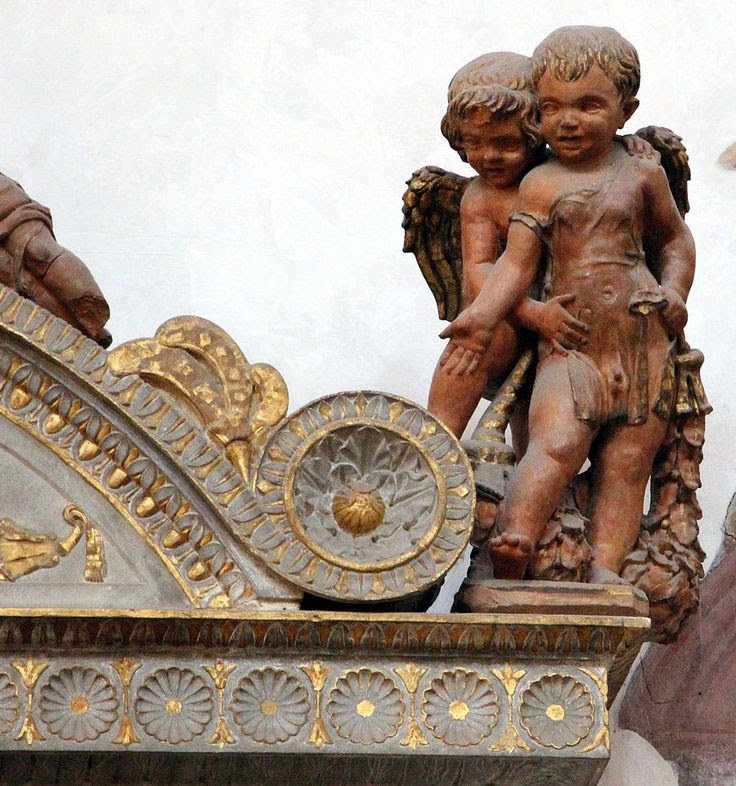 We also see the architectural details Donatello has included, the columns of the frame, the classical motifs. These effectively bring the classical elements the Italian Renaissance was known for into the work. The addition of the gold leaf, accents these classical details. The frame also has a couple of charming putti, who add to the piece. Putti, cherub like figures, play a role in much of Renaissance art, and are an interesting study on their own.  There are 6 on this piece. A pair on each corner and two at the center. I’ve included a close up of a couple.

This is a monumental sculpture, meaning it is very large. The figures are life sized, and the interior space is about 7 feet by 5 1/2 feet. You can see that the frame is quite heavy and substantial. This is also considered a relief sculpture. That means that the figures are raised from the back surface, not that they are sculpted in the round. As you can see the two figures are carved in what is called high relief, meaning they are highly raised, almost free standing. Donatello gives the impression of depth, by using different degrees of height on the carving. This creates a more realistic space.

The Getty Center essay on mango fruit in telugu

Frames and Pedestals, They Matter!

Frames and pedestals add to our first impression of a piece of art. Art is greatly influenced by how the work is displayed and by what surrounds it. Making the effort to consciously take note of these elements can increase our ability to read a work correctly. A closer look at a few sculptures will

A prayer nut is a Gothic, miniature sculpture contained inside of a sphere of boxwood. Prayer nuts were all the rage during the 1500’s, and personally, I’m not sure why they fell out of style. I find them fascinating. At the end of the post, I’ve linked to my video on this subject if you