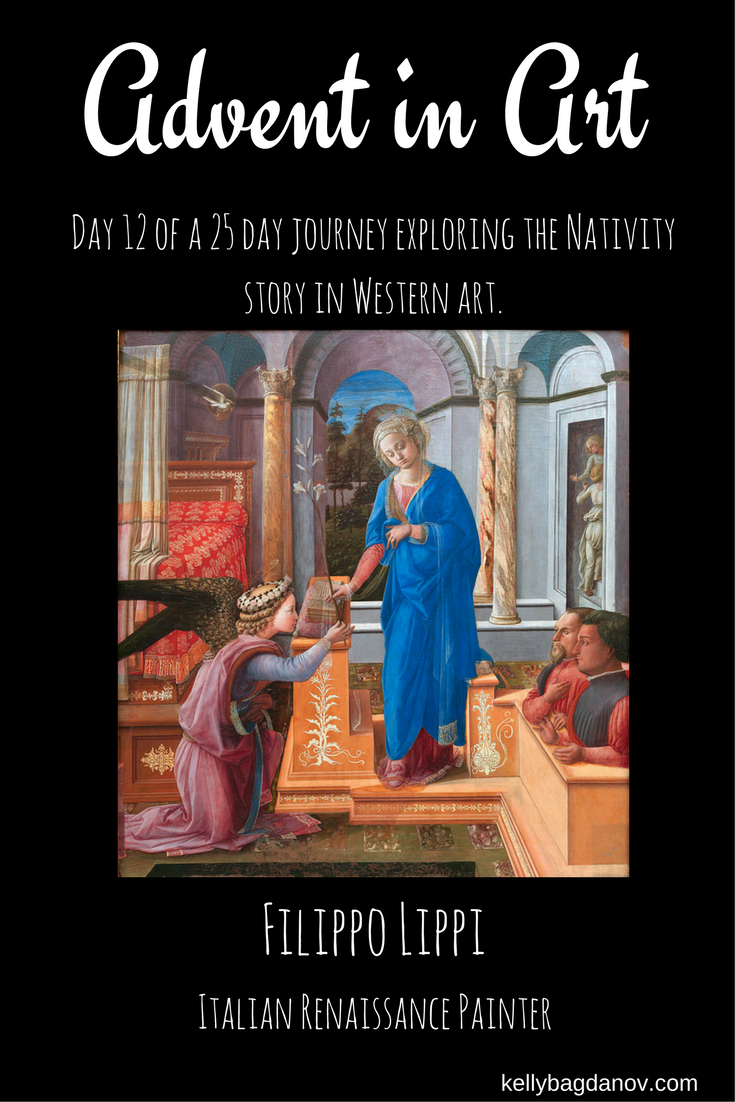 Filippo Lippi’s, Annunciation with Two Donors, is a beautiful Renaissance work that brings together the iconography of the nativity story. Today we’ll explore both the art and the controversial artist.

Filippo Lippi…his art and his life are fairly incongruous. He was a bit of a scoundrel, well, more than a bit. Figuring out where fact and fiction separate is difficult.

Lippi, an Italian Renaissance painter from Florence, was orphaned as a child, and sent to live with an aunt. At 8 he was given to a convent as the aunt was too poor to keep him. Given the era he lived in, this wasn’t a bad deal. She placed him and his brother with the Carmelite monks at Santa Maria del Carmine. While he was there the great master Masaccio was decorating the Brancacci chapel with frescos. He couldn’t have asked for a better introduction to the art of painting, and Masaccio’s work would continue to influence him over his lifetime.

According to the story, Lippi spent his time, during lessons, drawing on his and other students notebooks. Finally, it was determined that his time would be better spent in art lessons. He took his vows with the Carmelite friars when he was 16 and after working on frescos in the church, at 18, he and a few companions left the convent. 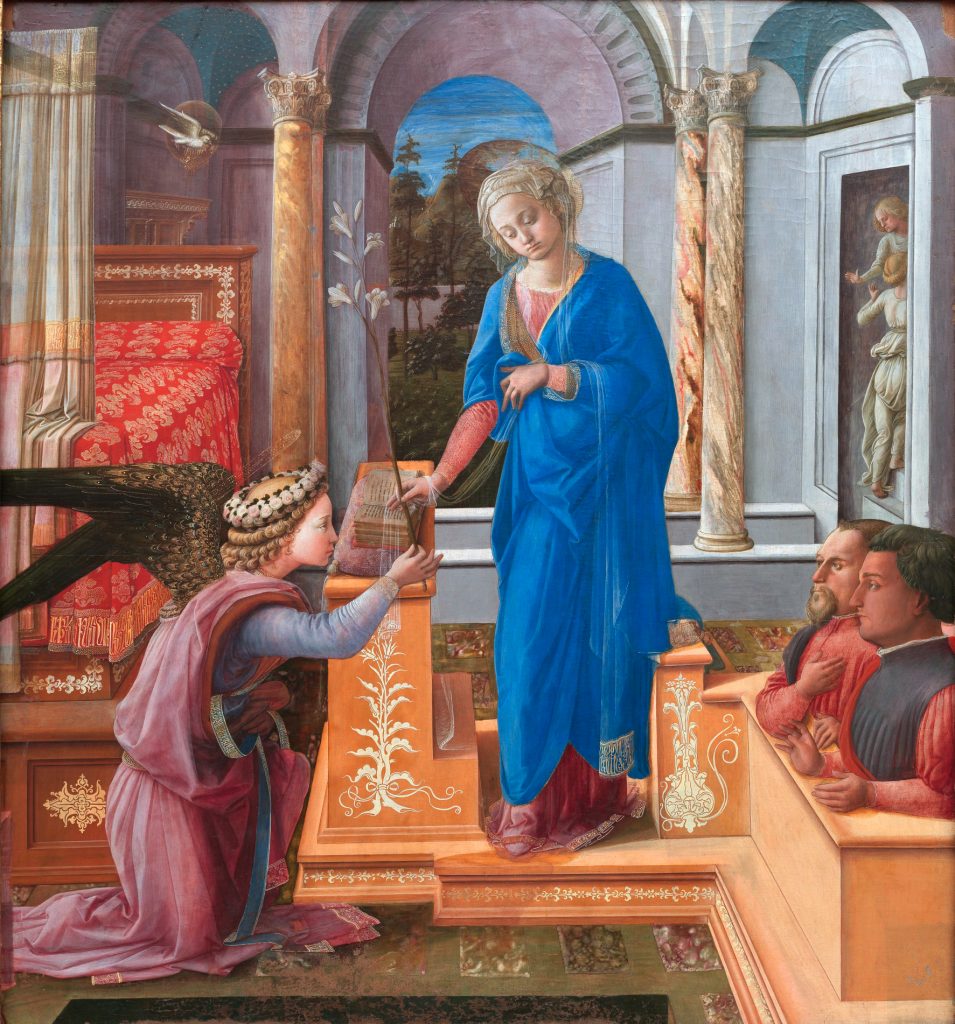 Here the story becomes a mix of legend and fact. It is said he (primarily by him) was kidnapped by Barbary Pirates and kept as a slave for 18 months. He won his release because of his artistic abilities. What is known is that he was in Padua for a period of time, and none of his artwork from this period exists today.

Eventually, he made his way back to Florence with the protection of the Medici family. He didn’t stay out of trouble however. Documents reveal a pattern of love affairs and late deliveries on contracts that kept him in constant trouble.

His turbulent personal life reached its heights when he was working on a painting in a convent of nuns. A young nun named Lucrezia caught his eye. He arranged for her to pose for him for a madonna he was working on, and, while they were alone, engaged in a sexual affair. When discovered, he abducted Lucrezia and fled. The nuns tried to retrieve her. This time he was arrested, tried, and tortured. The Pope eventually granted him release from his vows and a marriage. They had a son who also became a celebrated painter, but it doesn’t sound like his character improved any. When he died, some reports have it, he was poisoned.

His life and his art stand at opposite ends of the spectrum.

Here we have a beautiful rendition of The Annunciation. The traveling that Lippi did exposed him to art over quite a bit of Italy, bringing together many different influences. Many of the traditional elements of this scene are present.

Mary is dressed in blue, serene and beautiful as she accepts the message of the angel Gabriel that she is to bear a Child who will be the Savior. Her blue robe reminds us of the divinity of the Christ Child. We can see the red garment peeking out from under the blue, which reminds us that she is human. This clothing and color choice has been used by artists over the centuries to make visual the doctrine of the incarnation, or that in Christ, God took on human flesh that he might save his people.

A close look at the bench in front of Mary will show a book, Mary has been interrupted in her reading of the Bible. This is to show her education and interest in spiritual matters. 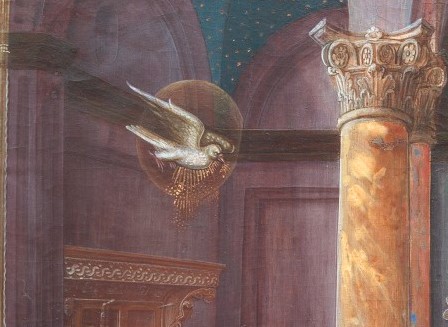 The dove of the Holy Spirit is descending in a golden halo to Mary. The Biblical narrative says that Mary will conceive by the Holy Spirit, thus the baby who is to be born will also be divine.

The angel is dressed resplendently emphasizing that he is a heavenly being. Yet, it is he who is kneeling. Gabriel is showing Mary a deep respect for the role she is about to take on, becoming the mother of God. This kneeling also foreshadows the future role as Queen of Heaven, according to Catholic traditions, that Mary will fill after her death.

The angel is handing Mary a stalk of lilies. Lilies are the Mary’s flower and declares her purity.

In the back of Lippi’s Annunciation, at the right, we see two girls fleeing up stairs, perhaps frightened by the appearance of the heavenly messenger. While Mary is completely still, these girls exude movement as their dresses tangle at their legs as they run up.

A beautiful landscape appears in the window behind Mary, framing her head. We can also see that we are in her bedroom as there is a bed covered in a red and gold blanket with a sheer bed curtain surrounding it. Lippi exhibits his technical skills and abilities in each of these background elements. The mastery of the body demonstrated with the girls fleeing, the realism of the small landscape, and the subtlety of the sheer curtain all attest to his abilities.

Lippi was inspired bycareer objective examples human resourc, and we can see his influence in the color choices. Beautiful, but soft, especially in comparison to the vibrant colors we see in the Northern Renaissance work by Van Eyck. Some have said that the difference in intensity of colors in the south and north might be explained by the difference of light in the two different climates.

This work is done in oil, and part of the advantage of oil is that it can be thinned to the point that it is more of a glaze, then glazes can be built up onto one another. In the drapery of the bedclothes to the left we can see that they are sheer, allowing us to look through them to the bed behind. We can also see the delicate work in the Madonna’s veil and halo.

The use of linear perspective is especially apparent in Lippi’s Annunciation. To see this we first have to find the vanishing point, which is in the center through the open arch and at the horizon line which is roughly 1/4 of the way down from the top of the painting. If you look at things like the pattern on the bed, the lines of color at the top of the room, or the furniture you can see that if you extended these lines into space they would all meet at the same spot. This is the use of linear perspective, and it brings consistency to the painting that makes it appear more real.

The composition of the painting is quite balanced and stable. The three arches, the Corinthian columns, lend solidarity to the image. The figures in the painting form a pyramid shape, which is the most stable of shapes.

This brings us to the donors painted in on the right. Painting donors, or the people who commissioned a painting, was common during the Medieval period and the Renaissance. They were generally painted smaller in scale than the main characters, although here they are in the same scale as the angel and Mary. The donors are generally looking on, while the religious figures appear unaware of them. Most often they are painted kneeling off to a side. In the coming decades artists will begin to include the donors more naturally into crowd scenes, incorporating them into the actual painting.

Why Annunciation Paintings were so Popular

Paintings of The Annunciation were exceedingly popular throughout the Middle Ages and Renaissance. I think I’ve always thought of the Annunciation as just one element in the nativity story, but not given it the consideration I should have.  The event was considered pivotal in the Middle Ages and Renaissance as it was a starting point in the story of salvation, and makes visual the moment of the incarnation.  Lippi, by himself painted the scene multiple times, in fact, each of the artists we’ve looked at has done multiple annunciations. Perhaps it is something we need to give more thought.

Lippi’s popularity in his lifetime, and influence on artists around him was significant and continued even after his death. In particular, he influenced essay is it safe to buy essay online, who we will be looking at later in this series.

Crucifixion Panel of the Isenheim altarpiece by Matthias Grünewald which was created between 1510 and 1516. Sister Wendy had this to say about the Crucifixion Panel in the Isenheim Altarpiece “In this noble veracity, Gothic art reached an electrifying greatness.”   Grunewald and Gothic Art Matthias Grünewald, a German Gothic painter, lived during the time

Rembrandt’s Dream of Saint Joseph emphasizes Joseph’s connection to the Joseph of the Old Testament, and to his role as the Saint of Hidden Things. Additionally, this work makes us reconsider the customary image of the sleeping Joseph. This painting is one of several that Rembrandt made of this story and I find it refreshing