Grunewald’s Annunciation from the Isenheim Altarpiece 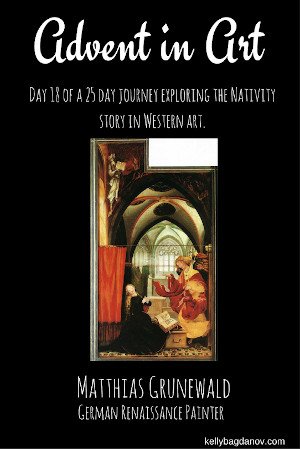 Grunewald’s Annunciation Panel on the Isenheim Altarpiece was painted to give comfort in a hospital that could offer little hope. With his mystic, emotional style, Grunewald’s Annunciation plays on the theme of Mary as the church, bringing Christ to a dark world. For the hospitals patients and family any hope was a welcome respite.

Grunewald, the last of the great Gothic painters

Matthias Grunewald was a contemporary of Albrecht Durer. Both men were important Northern Renaissance painters, both became embroiled in the turbulent politics and religious conflicts that dominated the era, and both expressed themselves in unique and arresting ways. Some of Grunewald’s paintings had originally been attributed to Durer, which is odd as they were the antithesis of each other.

Durer was an intense naturalist who was interested in the scientific Renaissance that emphasized empirical observation. His art made use of reasoned proportions, mathematical precision, and close observations of nature. Grunewald largely rejected the classicism of the Renaissance and his paintings continue, with their own twist, the Gothic traditions. There is an underlying current of Medieval German mysticism to his works, a highly emotional charge that is often disturbing in its intensity. You can view this video to understand more fully just how intense Grunewald’s work can be and what the full altarpiece looked like.

Hope for a hospice

We will be examining the Annunciation panel on his most famous work, the Isenheim Altarpiece, taken as a whole it’s effect is to stretch the viewers understanding of what it means to believe, what it cost Christ to save humanity. The Isenheim Altarpiece was made for the chapel in a hospital dedicated to Saint Anthony. This hospital served as a hospice for those afflicted with the plague, leprosy, syphyllis, and ergotism, a fungal disease that was carried by rye. These patients were relegated to the edges of society. The hospital did not function as a place to come for healing, as there were no cures, but a place to come to die; it was a hospice facility.

The altarpiece ordered for the chapel would be seen by patients and by those who worked within the hospital, a pretty dismal place.  The work is monumental and opens in layers. When the final panels are raised there is a shrine that houses extraordinary sculptures by Nikolaus Hagenauer.

Illustrations of the completed Altarpiece

There were 4 different views that were offered by the layered panels of the massive work. In order to appreciate our panel, I think it’s helpful to see the complicated work that the Annunciation was a part of. Below I’m going to place photos of each layer of the work, one to show it’s size, and one to who how it was constructed. Please, take your time scrolling through and then we will continue to the analysis of the panel we will be focused on today. 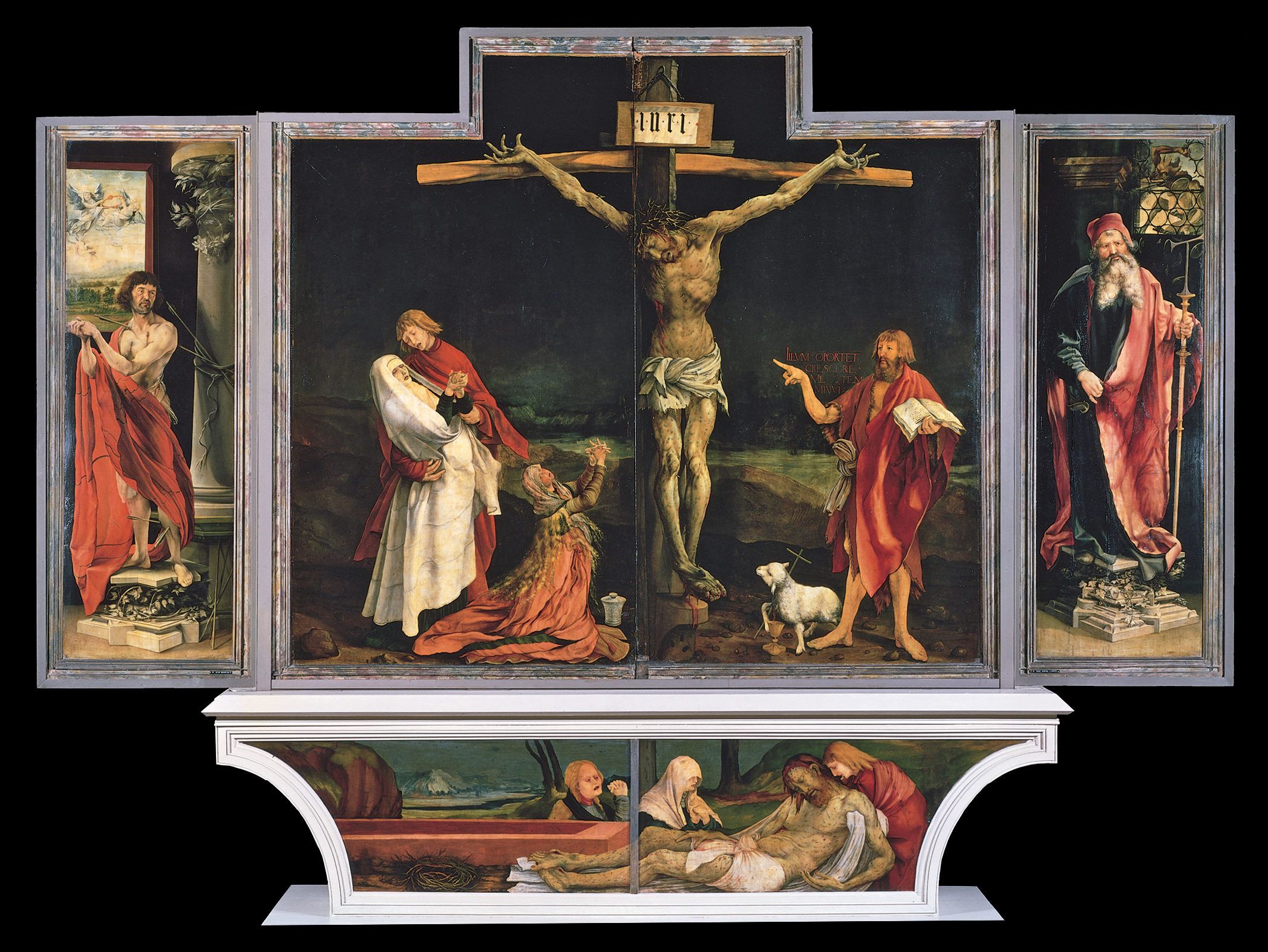 Grunewald’s Annunciation is in a church

We will be focused on just one of the panels, the Annunciation to Mary by the angel Gabriel.

The Annunciation takes place in a Gothic church. This had been done many times by Northern artists in this time period and would not have appeared unusual to the viewer. If you have seen my post on Van Eyck’s Annunciation, you will know there artist employed the symbolism of churches in many ways. The choice of a church is symbolic. Grunewald was aware that Mary would not have been in a church, but it had become more common by the time this work was done.

What was also commonly understood was that Mary represented the Church. The imagery was meant to convey that the church, like Mary, was to carry Christ and deliver him to a broken, sinful world in need of a savior. The imagery was meant to give strength to the monks who worked in the hospital, that they were embodying the mission of the Church. The patients who suffered from contagious, incurable diseases were isolated from society, set aside, and they and their families understood just how broken and dark the world could be. The monks at the hospital, an extension of the Church, were the hands of Christ and brought his message in a very tangible way to the patients and their families.

Grunewald gives us a hovering Gabriel

In Grunewald’s Annunciation we are given the moment of the angel entering Mary’s space, as she pulls away from the sudden intrusion. The angel’s robes are billowing around him, floating in the air. It’s not as if he’s rushed in and they are flowing behind him as we would expect, and how the scene is generally painted. Instead, it has the more mystical feeling, that he has just appeared and is hovering in the air speaking. The impression is less corporeal, more ethereal.  His clothing announces him as a messenger of heaven with it’s rich golden hues, and scepter he carries adds authority to his message.

Mary has once again been interrupted in her reading. She is reading (in Latin) from the prophet Isaiah, “Behold, a virgin shall conceive and bear a Son, and shall call His name Immanuel.” We can read the writing on the book Grunewald has painted. Then, the angel is there telling her the prophecy speaks of her.

As I looked at Mary I was struck by the color of her dress. Generally, Mary is robed in blue, as the intermediary between heaven and earth, and as her future role will be the Queen of Heaven, it is traditionally her color. After some research I discovered that the blue paint that was used, depending on how it was mixed would occasionally, over time, darken to a near black. I’m going to assume that that is what has happened here, as painting Mary in black, the color of Satan, is just not a possibility.  Although, not having a Medieval prejudice against black, I have to say the fabric looks like a rich velvet.

Blue was also the color of the cloth that was hung over the Ark of the Covenant. It is believed that the wooden box on the floor between Mary and Gabriel is meant to symbolize the Ark. As the Ark was where God was believed to have dwelled during the time of Moses, this is alluding to Mary being the New Ark, as God now dwells in her.

The red and green curtains that hang seem to reference the veil in the temple, behind which the ark would have been hidden from the eyes of the people of Israel. In the Old

Testament we learned that only one person under very special circumstances entered the Holy of Holies each year. The Ark was hidden behind the Temple veil. When Christ was crucified, the veil was torn from top to bottom, indicating it had been torn by God, and that with Christ death a new era had begun, with all men having access to God.

In Grunewald’s Annunciation the veil/curtain has been pushed to one side, not fully opened, but with the incarnation (God taking on flesh in the person of Christ) we have begun the journey to the cross that will end in the veil being torn down. With the veils pushed aside the light enters the church. Or put more plainly, the light (Christ is the light of the world) enters Mary.

There are three arched windows in the background, a reference to the Trinity. The Trinity is the Christian doctrine that while God is one, he is three persons: Father, Son and Holy Spirit. The symbol of the Holy Spirit is the dove and in front of the windows we can see the dove entering the scene. In Annunciation scenes there is almost always a dove as the Biblical narrative states that the Holy Spirit will come upon Mary and she will miraculously conceive.

The Isenheim Altarpiece is a phenomenal work, complicated, detailed, and rich in meaning. Each time I return to it I notice more details. I would really encourage you to watch the video on the crucifixion section of the altarpiece as it explores more fully Grunewald’s ability to express emotional and spiritual truths in a stirring visual way.

You can also read about the Resurrection panel of the Altarpiece here.

The Giotto Arena Chapel Nativity is the subject for day 3 on our Advent in Art Series. Background of the Giotto Arena Chapel In a Northeast corner of Italy is the city of Padua. Even in 1303, Padua was a cosmopolitan center boasting a prestigious University. One of the residents was a man named Enrico