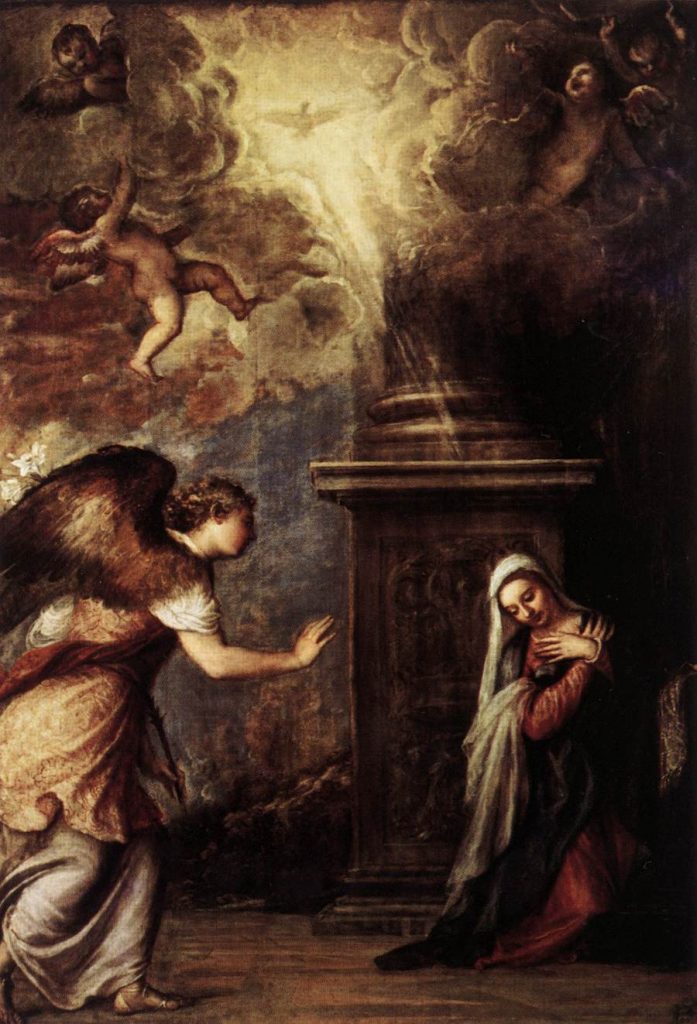 The Annunciation by Titian is one of the artist later works displaying his innovative loose brushstrokes and dramatic lighting. Containing more of the heavenly realm than the earthly, Titian alters the traditional Renaissance envisioning of the story.

The Venetian master, Titian was born Tiziano Vecelli. He was an Italian Renaissance painter who, by some accounts, lived to be 99 years old, and produced art up to his death.  He is most noted for his use of color and loose brushstrokes and helped to found the Venetian School of painting.

Titian was trained by both of the Bellini brothers, and painted with https://www.kellybagdanov.com/essay-personal-goals-life/. In fact, Titian’s work and Giorgione’s have often been confused. The painting we will be examining is from later in Titian’s life, when he has developed a style very uniquely his own. His contemporaries referred to him by the last line in Dante’s Paradise, “The Sun Amidst Small Stars.” Although this painting doesn’t use the vivid colors of his early works, his interest in color is still evident in the masterful use of subdued tones.

In this work we have Gabriel rushing in from the left, hand raised, body turned, clothes still in motion. In fact, the areas of the painting that are ‘heavenly’ are the parts of the painting that indicate motion and activity. Gabriel especially adds this element as he is caught mid-step with part of his foot and clothing outside of the picture frame.

In contrast, Mary is kneeling with arms crossed in an attitude of humble submission. She may be in the very act of kneeling as one knee appears to be not quite to the ground. Mary has no halo, but the white from her veil is glowing in the light streaming from above.

Mary is dressed in the traditional red gown and blue cloak. The clothing of Mary was a tool used by Medieval and Renaissance artists to identify a female figure as Mary, and to allude to the Christian doctrine of the Incarnation. The incarnation is the belief that God took on flesh and was born as the Christ Child. Mary’s red dress refers to her humanity, her blue cloak to Christ divinity. As Jesus mother, Mary carried the divine within her and this made her a key participant in the salvation narrative. Her role in that narrative is emphasized by her dress. 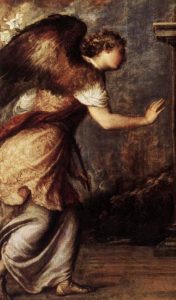 Where these events are taking place is unclear. There is a very large column behind Mary, and the floor looks to be that of an interior, however the background beyond Mary seems to be outdoors.

Usually, the setting of the Annunciation is a key element. Traditionally, Mary is placed either in a garden as Fra Angelica has done in the Cortona Altarpiece, or in Mary’s home, as we see in the Merode Altarpiece. It also became popular to place Mary in a church as Van Eyck has done. In each of these Annunciations the setting is integral to communicating the theological ideas of the artist.

Titian, apparently, was not concerned about Mary’s earthly surroundings. Generally, in Annunciation works we are firmly placed in the sphere of humanity and having a heavenly figure like Gabriel, show up is shocking.  That is not the case here. Only Mary is grounding the story on the earth, everything else in the painting is from the heavenly realm. When artist present the story of the Annunciation it is generally to emphasize the idea of God taking on flesh, Christ humanity is emphasized. In contrast, here we have the divine element of the story highlighted.

The dramatic entrance of the dove

In a similar way the dove, symbolizing the Holy Spirit, is generally small, entering on a shaft of light toward Mary. Frequently, it’s a detail that is easily missed. In contrast, here we have the dove backlit, appearing to stand, wings spread in a burst of light from heaven. Hardly, the shaft of light coming through a window, instead we have the heavens opening in all of their glory.

Our eye is drawn to the drama unfolding between Mary and Gabriel and then our attention quickly moves to look up at the opening in the sky. Both movements, Gabriel toward Mary and the heavens light shining on Mary, makes her the focus. 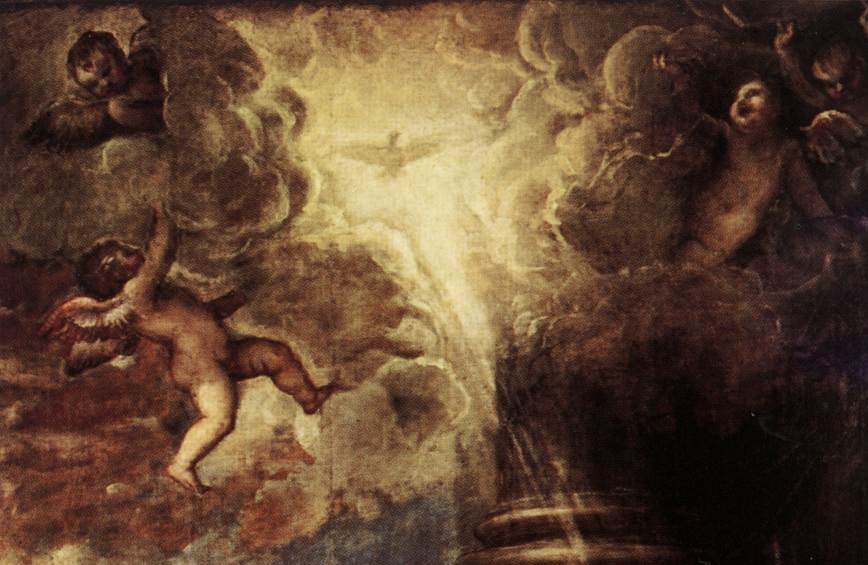 The top third of the painting is the clouds of heaven filled with small angels. The small angels, or putti, up in the clouds deserve a closer look. They are charming in their chubby toddler-like appearance. Starting on the left and moving toward the right, the first putti we see is the only one looking down on the scene below. He seems curious to see how the drama will unfold.

The putti below him is the most noticeable. He appears to be either pulling back the clouds, or perhaps was pushed backwards as the dove burst forth. Either way, I’m glad he has his little wings to keep him aloft.  The two small angels on the right are both gazing toward heaven. The one in the light has one hand raised and the other gesturing down. The one that is hardest to make out has both hands raised as if in praise.

As I consider the postures of each putti I wonder if they picture the varied responses throughout heaven to the news that God has taken on flesh so that he can save his creation. Curiosity and praise would seem to be pictured in equal parts.

Titian’s masterful use of light

How Titian has painted light is at the heart of this painting. In the top right the light burst forth. It is strong and bright, illuminating the work. As the light shines on Mary, it makes her veil into a halo. The room (or outdoor space) Mary is in had been in darkness until illuminated from above. It reminds me of the verse in Mark 4,”the people living in darkness have seen a great light; on those living in the land of the shadow of death a light has dawned.”

Titian has given us a beautiful visual rendition of the Annunciation story. I hope you are enjoying our Journey through Advent Art. If you want to read more articles in this series you can follow this link.

Video – The Conversation That Is Art

Check out the video below “Conversations in Art” and the full article here on the Blog: The Conversation That Is Art: An Introduction to the Study of Art History.   Art is an exchange of ideas that expands our understanding of what it means to be human. Across time, geography, and social constructs, artist reveal

Rembrandt’s Storm on the Sea of Galilee