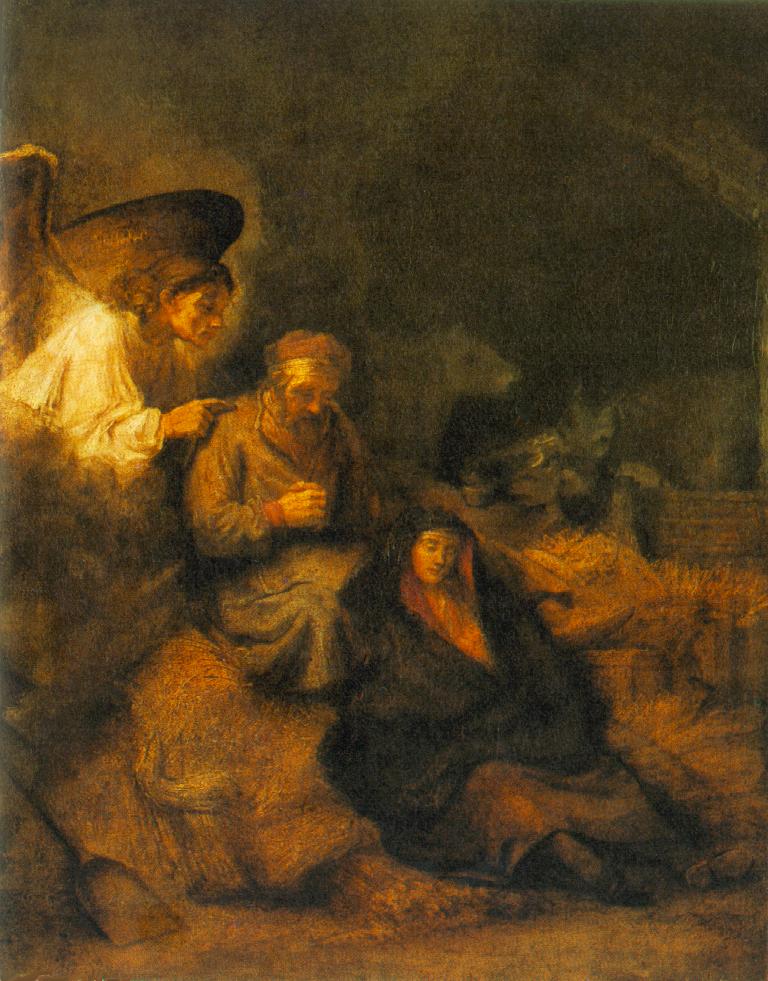 Rembrandt’s Dream of Saint Joseph emphasizes Joseph’s connection to the Joseph of the Old Testament, and to his role as the Saint of Hidden Things. Additionally, this work makes us reconsider the customary image of the sleeping Joseph. This painting is one of several that Rembrandt made of this story and I find it refreshing that Joseph is finally getting a painting focused on him.

Rembrandt Van Rijn, the extraordinary Dutch Master, was both a painter and an etcher. After a quick unsatisfactory trip to University at 14, Rembrandt began an apprenticeship in art, and the rest is history. Early in his career he found success and always was able to work as an artist. He did end his life in poverty, but that was due to a lack of money management, not a lack of work.

Creating art over 46 years, it is not surprising that Rembrandt’s style changed many times. The work we are looking at today was painted between 1650-1655, when he was in his 50’s.

Rembrandt’s unique style was based on his use of light, which he used to highlight the emotional state of his subjects. Additionally, there is little shine to the paint’s surface and the paint itself was applied in layers thick enough to add texture to the painting.

It should be noted that the varnish used on paintings during Rembrandt’s era darkened significantly over time. Often we think of Rembrandt’s works as being quite dark, when the originals were much less so. In fact, Rembrandt’s most famous work, The Night Watch, is not a night scene. Over time the varnish darkened to such an extent that it appears to be night. The Night Watch is currently undergoing restoration work, and there is a great deal of debate over how much of the varnish to remove, as we are so familiar with the work as it appears now.

The imagery in this painting would have been familiar to Rembrandt’s audience. The nativity cycle (or stories that were painted around Christ birth) included several that take place after the birth of Christ.

As recorded in the gospel of Matthew, wise men arrived from the east, and they went to see King Herod. The stars had told them a great king had been born and they had come to worship him. This was not welcome news to Herod, who immediately began to plot the child’s death. But Joseph was warned in a dream to take the child and flee to Egypt.

The Composition of Rembrandt’s Dream of Saint Joseph 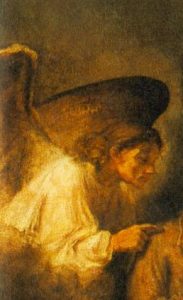 In this work, the composition is developed on a strong diagonal, running from the illuminated angel down to Mary’s feet.

Our eye naturally starts at the angel. Not only is the angel the brightest part of the painting, the angel seems to be the source of light. Rembrandt’s angel is very human, gently tapping Joseph’s shoulder as if he’s not only giving a message, but waking him up so that Joseph and Mary can make their escape. The angel appears to be coming out of a cloud, half in the celestial realm, and half in the earthly.

The donkey and oxen lay in the deep shadows in the back of the barn.

The Biblical Context of Rembrandt’s Dream of Saint Joseph

From the gospel of Matthew we learn that Joseph, despite his weariness, will load up his small family and flee to Egypt, arriving as a refugee without work, family, or connections. Defying King Herod at great personal risk he seeks to save a baby who isn’t his. Joseph’s quick actions save the child. King Herod, in anger, desperate to eliminate the child who might claim his throne, ordered every child under the age of 2 in Bethlehem killed. The massacre of the innocents, a horrific event recorded in the gospels, is another popular art subject.

The Bible records very little about Joseph, except his dreams. Four times angels appear to Joseph, in dreams, to warn and guide him as he fulfills his role as the protector of the Holy Family. The first dream reassures Joseph that the child Mary carries is of God, and that he should take her as his wife. The second dream is the subject of this painting, a warning that King Herod is going to attempt to kill the child. The third dream comes while Joseph is in Egypt telling him that Herod is dead and it is safe for the family to return. The fourth dream is another warning that it would be safest to move to Nazareth.

Rembrandt was fascinated with the internal lives of his subjects. Trying to imagine the internal life of Joseph must have intrigued Rembrandt as he painted this story several times. Rembrandt believed that a person’s appearance gave clues to their internal life and that he could paint in ways that would reveal the soul. So in Rembrandt’s Dream of Saint Joseph we have Rembrandt’s vision of Joseph’s soul.

We know that Joseph is asleep, as he’s having a dream, yet, he appears to be in prayer. His head is bowed, his hands are clasped, and his wrinkled brow and countenance make him look weary. Sitting upright, he doesn’t appear to be in a comfortable position for sleep. Mary by contrast, wrapped in her voluminous blue cloak is reclined back onto the hay, and Joseph. He is there supporting, protecting her.

Throughout art Joseph is painted as an elderly man, often small and off to one side, and frequently sleeping. One reason for this is that, as a sinner, he was not ‘holy’ enough to witness the birth of the Christ. However, Joseph is a dreamer. What we know of him is his dreams, so a sleeping Joseph in art reminds us that God spoke to Joseph through his dreams and that Joseph obeyed.

Along with looking weary, Joseph also appears troubled. Extra-Biblical stories recount that Joseph suffered from guilt over the course of his life that he obeyed God and fled, rather than warning the other families in Bethlehem about the coming massacre.

Joseph’s dreams echo the story of Joseph in the Old Testament who was also a dreamer, was taken to Egypt, and who rescued not just the people of Israel, but much of the known world from a great famine. Some of the similarities are easily seen, dreams, Egypt, and salvation. In each story, the two Joseph’s must have faith, they must believe that the dreams they have are messages from God. Then, they must act in obedience. In each case there were difficulties to be overcome, sacrifices to be made, and the good of others given priority.

The Joseph of the Old testament is often viewed as a forerunner of the coming Messiah, as the events in his life echo the salvation narrative of the life of Christ. In the same way, the two Joseph’s echo one another’s stories as they dream, obey, and save.

St. Joseph has been called the saint of hidden things. This is because his role, as the earthly father of Jesus, was that of protector and guide during the years Jesus was growing up. We know very little of those years, they are the hidden years. And while those years were hidden from us, they were not hidden from Joseph. He knew the child Jesus, guided and raised him.

Joseph’s role in the Holy Family, and in the church, is without glory and honor. Just looking at nativity art we see that Mary is given both glory and honor for her obedience and suffering. In fact, after her death she is made the Queen of Heaven. Joseph was obedient as well, but his obedience and the critical role he played is largely unnoticed. He is not just privy to the hidden elements of Christ life, but he, himself, is unseen.

Unseen that is, until he caught the imagination of Rembrandt. Rembrandt was in his 50’s when he painted this picture of Joseph. Rembrandt who believed, perhaps, that he could see the hidden things in people’s souls and transfer the hidden to canvas. I would imagine painting an older man like Joseph, who still has the most important work of his life ahead of him, would have been appealing.

Where is the baby?

I chose this painting because of Joseph, his weariness made me consider a bit more about this Nativity story when viewed from his perspective. My focus on Joseph delayed my noticing…where is the baby. Given the timing of the story, Joseph has this dream after the birth of Jesus.

In every Nativity work we have looked at so far, the baby Jesus is front and center. I wondered if we were to assume the baby was wrapped in Mary’s cloak, unseen by us. Perhaps that is the intention. As I enlarged various sections seeking for the baby I did find one. maybe the baby is there in the straw and is less obvious because of darkening varnish. I’m curious what any of you think, do you see a baby? I think I might on the far right, level with perhaps Mary’s shoulder. At the very least, it’s odd.

If you’ve enjoyed this article, there are others in this series at this [link

Murillo’s Adoration of the Shepherds

Christ Washing the Disciples’ Feet was a favorite theme of the artist Tintoretto. He painted at least 6 versions of this famous Bible scene and this is  the most refined and notable. If you are looking for the video, it is at the end of this post. Who was Tintoretto A man of many names

Let a Child Lead You

Color in art is…complicated. While working on writing a clear, somewhat comprehensive article on the subject for my curriculum, I’ve struggled far more than seems reasonable. Connected to my thoughts on color, in a round about way, is another topic I’m interested in: teaching art to children. Color in art can be realistic, symbolic, emotive,