Murillo’s Adoration of the Shepherds 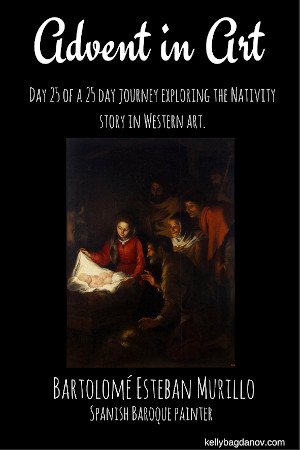 Bartolome Esteban Murillo’s, Adoration of the Shepherds, brings to life the phrase, “the people who walk in darkness will see a great light.” Creating an intimate scene of adoration, Murillo invites us to join the shepherd’s in worshipping the Christ Child.

Bartolome Esteban Murillo, a Spanish Baroque painter spent his entire career in Seville, Spain. Known for his religious paintings, peasant children, and lively street scenes, Murillo’s works were very popular, both in his life time and after.

Murillo was a devout Catholic with deeply held religious convictions. He was also a man with great imagination who could inject compassion and realism into Biblical figures making them come alive. His paintings allowed people to insert themselves into the story and identify with the characters, drawing them into a deeper devotion and understanding

The Catholic Reformation and Murillo’s Adoration of the Shepherds

Churches were the largest patron of the arts during the 1600’s, and during the Counter Reformation the Catholic Church  invested heavily in art. There was a need for works that communicated the reforms the church was making and to reinforce key doctrinal points.

Perhaps the driving force was a call to address the corruption within the priesthood and hierarchy of the Church. Protestants also attacked several key Catholic believes including: The doctrines surrounding Peter as first Pope and the unbroken line to the current Pope, the doctrines concerning Mary and the practice of venerating her, and the doctrine of communion, particularly the belief that the bread and wine physically becomes the blood and body of Christ.

In Murillo’s Adoration of the Shepherds, Murillo reinforces the veneration of Mary, and elevates the idea of sacred poverty. Sacred poverty was a concept that developed in response to the charges of priests living extravagantly. Emphasizing the humble nature of Christ birth, and common people who surrounded him during his life, highlighted the  idea that God values simple, pious living over riches and grandeur.

The people who walk in darkness will see a great light

Imagination is a powerful tool of both art and religion. In Murillo’s works we see a master combine the two to give us a powerful painting of the Incarnation. There are 7 figures in Murillo’s Adoration of the Shepherds, 5 of which are highlighted by light.

The most notable figure is the Christ Child, the only source of light in the painting. The ‘Light of the World’ has come, and in this painting we see His light literally illuminating the darkness. The light reveals to us that this baby is God incarnate.

The baby is also naked, helpless, and very much a real baby revealing to us that God has indeed come in the flesh. While we often see the figure of the infant Christ with rays shining from him, we rarely see so clearly the image of ‘the people who walk in darkness will see a great light’.

The light illuminates Mary, and reveals a young woman, her red dress an allusion to Christ future suffering and death. She gazes at the child, unwrapping him for the shepherd’s to see. 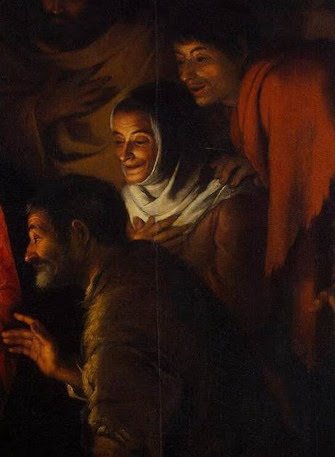 Then we see the shepherds, each a real person with distinct features. The three that we see most clearly show three different stages of life. We have a fairly young man, an elderly man, and a middle aged man, perhaps all generations of a family. This was a convention used by Murillo in other paintings of the shepherds to show inclusiveness, that Christ came for all, regardless of age or station in life.

In some of his Adoration paintings he shows the shepherds with three humble gifts, eggs, a chicken, a lamb. The gifts play off of the gifts that the wealthy Magi show up with. This shows an inclusion of people from different classes and different races.

The shepherds and Magi, due to God’s direct interventions were included in the Biblical story.  God sent angels to the shepherds, including the lowly in the birth of His son. God sent a star to guide the Magi to His son, including the foreigner. We are so used to the wise men and shepherds being a part of nativity scenes that we might overlook the fact that they didn’t just happen to wander upon the scene, but that the Biblical narrative tells us that God had directed them there. The nativity story is the pivotal point of the Bible, and at this crucial juncture God brings together groups that would not normally come into contact with one another.

Intimacy of the moment

The use of light, along with highlighting the divinity of Christ, also makes this a very intimate moment. We can feel the silence of the night, the quiet joy in the birth of the new baby.

The kneeling shepherd has his back to us. Often artist place a figure in this way to invite us to adopt the perspective of that figure. In this case there is a space left for us to join the kneeling circle and join in the adoration of the child.

This makes the viewing the painting a personal and intimate moment, easily encouraging an attitude of worship and devotion in the viewer that Murillo was hoping to accomplish.

If you have enjoyed looking at this Adoration of the Shepherd’s you might enjoy some of the other articles at this link.