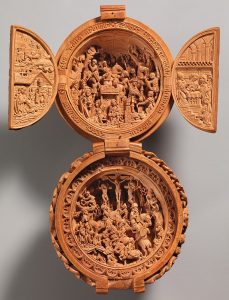 A prayer nut is a Gothic, miniature sculpture contained inside of a sphere of boxwood. Prayer nuts were all the rage during the 1500’s, and personally, I’m not sure why they fell out of style. I find them fascinating.

At the end of the post, I’ve linked to my video on this subject if you prefer that format.

Prayer nuts: Are they made from nuts 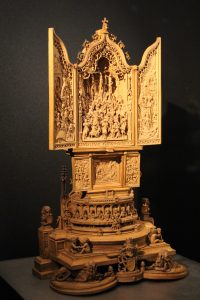 The name ‘prayer nuts’ comes from a Dutch word that basically translates to, no surprise, prayer nut. Some believe the original beads were carved from actual walnuts. Others think that name reflects their size and shape. Most prayer nuts range in size from that of a walnut to a golf ball. As we view the pictures of these miraculous sculptures, keep in mind their small size. The delicacy needed to create the details is astounding.

Prayer Nuts: Adam Dircksz, the most prolific maker of the prayer nut

Roughly 150 prayer nuts have survived and are largely held by museums around the world. Of these extant prayer nuts 60 are connected to the workshop of Adam Dircksz.

Dircksz signature appears on some carvings but nothing is known about who he was or his life. Due to the Flemish inscriptions on some carvings it is thought Dircksz might have had a workshop in the southern Netherlands.  This belief is bolstered by the fact that, aside from the Paternoster beads commissioned by Henry VIII, all of the rest of the prayer nuts connected to Dircksz, owners were from the Netherlands.

Dirckz is also believed to be responsible for this portable altar which is also a miniature work measuring just 9.9 inches high and 5.5 inches wide. It is believed this altar took over a decade to create. The similarities between this altar and the prayer nuts we have today show a homogeneous group with nearly identical technical and stylistic characteristics. Even the themes of all the works is the same. Leading many experts to believe Dircksz influence, whoever he was, dominated this art form. 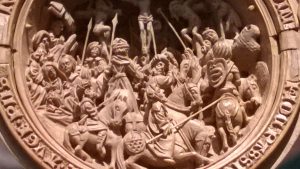 Prayer nuts: What do they contain? 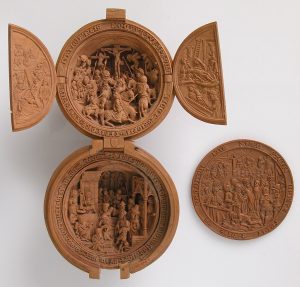 The small balls, carved from boxwood, open up to reveal scenes from the life of Christ, most often scenes of the crucifixion and passion week. Many also contain scenes of the nativity narrative.

Boxwood was used because it has a very fine grain which makes it suitable for this type of engraving work. Additionally, during this era, it was believed that Christ cross was made from boxwood, making it a popular choice for religious works.

There are two half spheres that artists had to work in, and then, often, additional panels that were in the center and opened to reveal the second half of the sphere. These panels provided additional room for carvings. The spheres and the internal panel, each open successively to sequentially reveal a story. The nuts have been likened to an altarpiece, or tryptych that starts closed and then as it is opened reveals additional paintings. In a sense, these small balls serve as personal altarpieces, and with each additional layer, the viewer is pulled deeper into the story being told.

The carvings in the sphere portion of the balls were done in high relief, meaning the figures are almost fully formed, although still connected to the wood of the background. In contrast, the carvings on the panels (if there were panels) are generally a low relief, almost an etching of the story. Sometimes these etchings were also painted.

Some prayer nuts are extremely intricate, containing 50 figures or more. The clothing of the minuscule figures could be elaborate, as were the buildings and items the figures held. 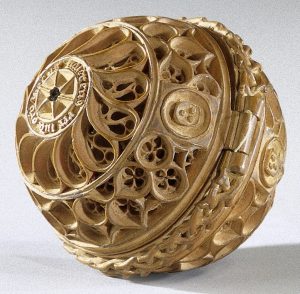 The outside of the prayer nut was frequently carved with intricate geometric shapes and words might circle the ball telling what stories were included in the miniature sculptures. In the more elaborate balls the outside carvings might have been done in metal.

The prayer nuts then had a ring inserted into them allowing the nut to be attached to clothing, necklaces, or rosary beads. Some owners chose to put their prayer nuts into velvet pouches that they could then attach to their belts, and more safely go about their day without fear of scratching up the outer surface of the ball.

Generally in art, as in life, we associate greater size with greater wealth and/or meaning. For example, a monumental size painting is generally worth more than a small portrait. For starters, the materials needed to complete monumental works is higher, and the size can dictate the time needed to complete the work.

However, when dealing with these delicate micro-sculptures the opposite is the case. The smaller the prayer nut the more time and skill needed to complete the work. Months, even years, could be spent on one of these tiny works of art, making them quite expensive.

Of course, not all prayer nuts were created equal. Some were simply carved in low relief and then painted, requiring far less time from the artists. Others, like the, Paternoster bead, made for King Henry VIII to gift to his wife, Catherine of Aragon, would have taken far longer. The Paternoster bead is actually a string of beads used to say the Rosary, and the final bead is the prayer nut that opens.

Not only was the size inversely related to cost, but smaller beads were thought to have a greater spiritual impact on the owner.

diwali essay in english languagePrayer Nuts: An aid to devotion?

There is a bit of a debate about the devotional use of the prayer nuts.

Many believe the nuts were used as a devotional aid for the individuals who purchased them. The idea is that using the nut during prayers would focus one’s attention on the gospel narrative and help the worshipper to achieve a deeper level of devotion.

On the other side of the debate, scholars have noted that they carvings are so small, so intricate that they require magnification to see. To be used as a devotional aid, the owner would need to own special glasses or a magnifying glass similar to the one the carvers needed to create the prayer nuts in the first place.

Prayer Nuts: So why own one if not to aid in devotion?https://www.kellybagdanov.com/good-expository-essay-topics/

As I’ve said, the prayer nuts were all the rage for a time, but if not useful as a devotional aid, why were they so popular.

Well, humans are the same in every century. Prayer nuts were a pious way to display one’s wealth, and tell that world that you are an important, devout person. Being able to simultaneously display both piety and wealth is the ultimate win-win.

Grunewald’s Annunciation from the Isenheim Altarpiece

Art is a Conversation

Art is a conversation between the artist and the viewer. To participate in a conversation we must speak, at least some, of the same language. Art as Visual Language Every discipline has it’s tools. Writer’s craft with words to stimulate the senses, rouse the emotions, and spark our ideas. Construction workers use tools to make

The Nativity at Night

The Nativity at Night by Geertgen tot Sint Jans, painted in 1490, was a devotional tool. Encouraging believers to contemplate the nativity was thought to bring the believer into greater communion with God. Specifically, contemplating Christ birth was meant to facilitate the viewer in bringing forth their own spiritual rebirth. Geertgen was an Early Netherlandish