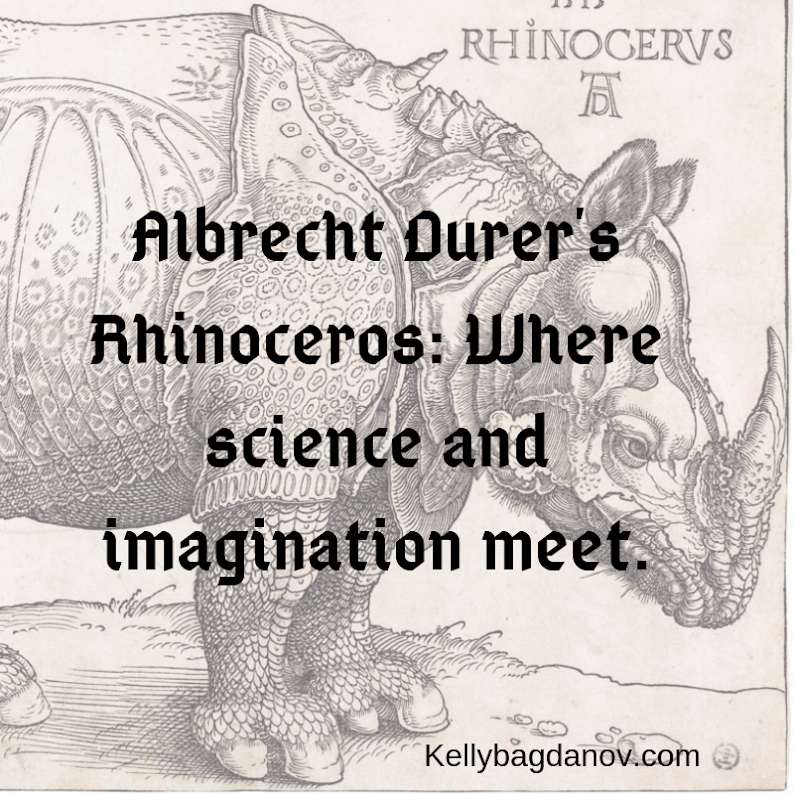 Albrecht Durer’s Rhinoceros print is a woodcut that is part scientifically accurate and part charming fantasy.

We’ve examined how the description of a Rhinoceros came to Dürer in this post, now we will move on to the actual print of Dürer’s Rhinoceros, how it was made, and what the words on the top of the print reveal.

This print is a woodcut. A woodcut is a form of printing where a design is drawn on a block of wood, and then a skilled artisan cuts away the white areas leaving raised lines that are then spread with ink with a roller tool called a brayer. Then a piece of paper (or cloth) is laid over the woodcut. At this point the print-maker can either rub the paper transferring the print to the paper, or place the woodcut and paper in a printing press.

During the time of Albrecht Dürer the printing press was coming into use, especially in Germany where Johannes Gutenberg had made technical changes to the press that expanded its use and popularity. (Gutenberg deserves his own post as his contributions to history are significant and far reaching, so we won’t go into it here.)

The artist workshops which produced quality woodcuts received prestigious assignments illustrating holy manuscripts, scientific journals, and other important literary works. With the printing press driving the market for books and prints, artists were pushing the boundaries of what could be achieved with this humble art form. Pictures were becoming more involved requiring greater and greater skill from the woodcarvers, and a delicate hand from the printers.

The artist who pushed this boundary the furthest was Albrecht Dürer. His compositions astound us. The drawings are wondrous, but considering the skill needed to carve the delicate lines, well, it’s a bit beyond my imagination. Especially when you realize most of his woodcuts are approximately 15 by 11 inches. That is a very small area to work in, requiring very precise cuts with very sharp  tools. To complicate matters a woodcut is a mirror image, it prints in reverse. Any text on the page is reversed so that it is legible when printed.

On a side note, I still have a scar on the palm of my hand where, as a high school student,  I cut myself with a U-gouge while making a linoleum print. Linoleum! The gouge moved easily through the linoleum and still it was hard to control. I had to make changes to my rather clunky illustration of the lion, Aslan, from the Chronicles of Narnia because of unintended cuts and slips. Working with hardwood, hmmmm.  Maybe not.

Dürer was the first artist to realize the potential of the woodcut to provide a sustainable income, something unheard of for artist who had to wait for commissions from wealthy patrons. Dürer recognized that he could do a print run of a woodcut himself, and then sell the same work over and over again getting paid multiple times for the same amount of work. This was a novel and astounding idea. It doesn’t seem remarkable to us, but in his day the concept was novel.

Dürer took on many commissions in his life, but he also drew what inspired him, produced prints, and created a steady income that was not dependent on the good graces of the local nobility or the church. His business acumen was as sharp as his artistic ability, as was his ability to ‘brand’ himself and his work. (More about that in a later post.)

Dürer’s Rhinoceros proved to be a very popular print, both during Dürer’s lifetime and after his death. The combination of Dürer’s name and the sensation the Rhinoceros had created in Europe created demand for the print.

As we examine the print a bit further we can appreciate that much of the animal is accurate. 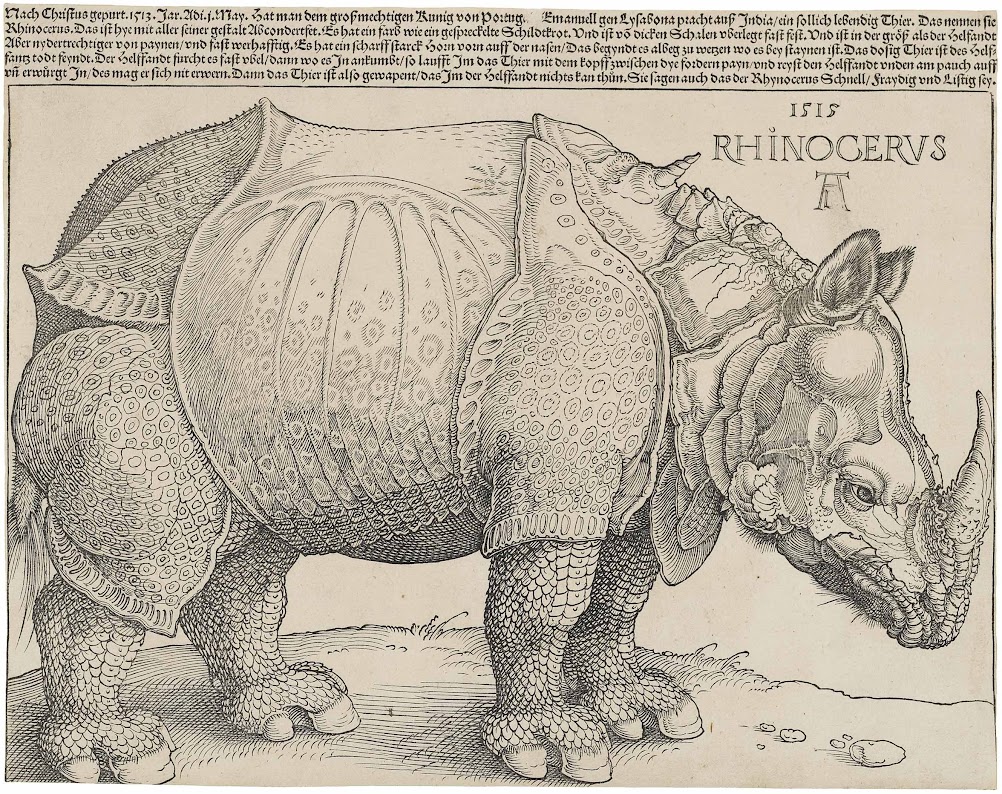 The sturdy legs and hooves, barrel shape of the body and forceful head are all there…however there are some striking differences between this picture and a real rhinoceros. 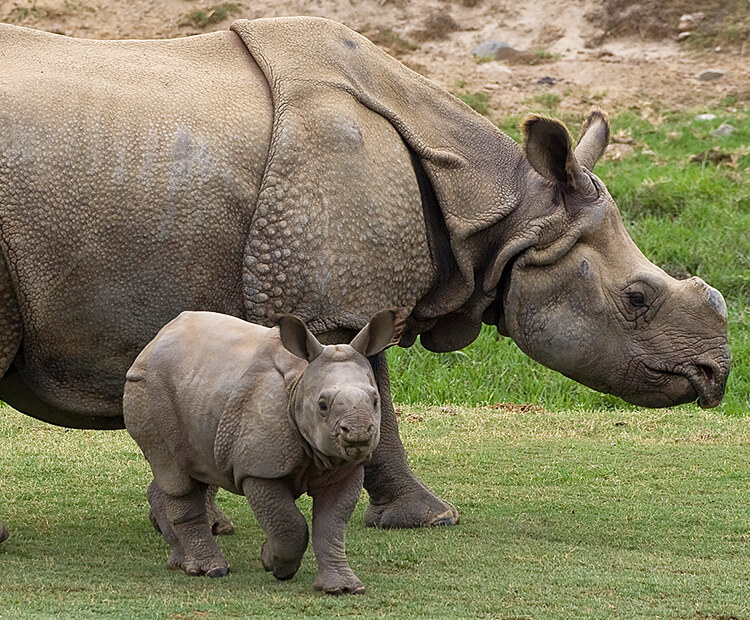 Most noticeable is the armored plates instead of skin. When we examine a picture of an Indian Rhinoceros we can see how the folds in the skin could translate into the idea of armor, especially when all one was going by was a description.

Another notable difference is the unique patterning on the skin that Dürer has included. Some wonder if the Rhinoceros had dermatitis from being kept in captivity and that is the origin of the patterns.

Some Rhino’s have two horns, and we can assume that Genda, the Rhinoceros who inspired the print had two horns, however the position of the second horn was left out. Durer chose to put the horn on the Rhino’s back, perhaps he imagined it would help with defense.

Some of my favorite parts of this print are the hairs on the Rhino’s chin. They are a small thing that adds a great deal of character and demonstrates why Dürer’s prints were highly prized…which brings us to a recurring problem Dürer had to deal with.

Woodcut designs were easy to steal. An artist work could be copied once the prints were on the market, and his designs were worth pirating as they consistently sold and there were no copyright laws. Dürer suffered enough that he went to court to try to stop one printer from continuing to sell his work. The ruling was others could copy his prints, but they could not copy his ‘logo’ which he owned. This ruling is a reflection of the station artists held in that time, they were considered craftsmen, blue collar workers if you will, nothing more. Dürer fought this perception his entire career. To Dürer’s advantage, the copied prints were not equal to the originals. Few woodcarvers had the skill to reproduce the images he drew.

Dürer’s logo is derived from his two initials and figures prominently in most of his work. On the Rhinoceros you can see the logo on the top right corner.  Along with the logo Durer often included the year and sometimes something else more personal written alongside it.

“‘On 1 May 1513 [this should read 1515] was brought from India to the great and powerful king Emanuel of Portugal at Lisbon a live animal called a rhinoceros. His form is here represented. The Rhinoceros has the color of a speckled tortoise and it is covered with thick scales. It is like an elephant in size, but lower on its legs and almost invulnerable. It has a strong sharp horn on its nose which it sharpens on stones. The stupid animal is the elephant’s deadly enemy. The elephant is very frightened of it as, when they meet, it runs with its head down between its front legs and gores the stomach of the elephant and throttles it, and the elephant cannot fend it off. Because the animal is so well armed, there is nothing that the elephant can do to it. It is also said that the rhinoceros is fast, lively and cunning.’

In fact, elephants and rhinos are not mortal enemies and in some areas of the world elephants are used to transport people for the best views of the rhinoceros.

Dürer’s Rhinoceros has inspired many diverse artists ranging from the surrealist Dali to the Renaissance Sculptor Giambologna. The iconic image is one that has delighted across centuries and I don’t think it’s popularity will wane anytime soon.

So what do you think of Dürer’s Rhinoceros? Would you hang it in your house? If you missed the first post that told the story of the real life rhino who inspired the print you can find that here.

Every week I’ll be posting more about the fascinating world of art, so please subscribe so you won’t miss out.

Nicola Pisano Nativity Panel in the Baptistry in Pisa.

Background on the Pisano Nativity Panel The Piazza dei Miracoli The work we will be considering is the Nativity panel in the Baptistry in Pisa from a pulpit designed and sculpted by Nicola Pisano completed in 1260.  This information is also available in video here. A bit of background is necessary to put this work into

Tintoretto’s, Nativity provides the viewer with a unique portrayal of the familiar nativity story. Skillfully using light, and the distinctive architecture of a two story barn, Tintoretto connects the iconography of the Nativity with that of the Last Supper. Providing multiple examples of food, drink and nourishment, Tintoretto links our physical need for sustenance with