Botticelli’s Venus and Mars is both beautiful and humorous. Mischievous satyrs, clear bright colors, hidden symbols, and missing legs all deserve a closer look so let’s get started.

Botticelli’s paintings of mythological stories are among his most famous. Botticelli’s Venus and Mars is telling the story of the illicit love affair between Venus and Mars. The gods and goddesses in Greek and Roman mythology seemed to move through lovers with astounding speed, and keeping up with the players can be confusing, keeping track of their offspring is like entering the Labyrinth.

In this retelling of the story we have Venus reclining on the left side of the painting in a beautiful white gown with gold trim. She is alert, calm, and looking off into the distance. Mars is sprawled to the left, sound asleep, presumably after love making. These simple observations bring us to the central theme of the work, that love conquers all.

Venus is the goddess of love; Mars is the god of war. With Venus awake and alert, and Mars dead to the world, it is clear who the conquering heroine is in this rendition of the story. The lance and the conch shell provide more sexual imagery, and the sleeping Mars plays into a common comedic theme in Renaissance Italy, that being the habit of the man to fall asleep after sex.

The figure of Venus is reclining in a classical gown, looking regal and calm. The plait of her hair wraps around and becomes part of the adornment of her dress. She embodies grace and beauty and stands in stark contrast to Mars.

Mars is not just dozing, he is sound asleep. Hardly the god of war in this painting, he’s put aside his weapons and armor and is sprawling, naked and defenseless on the ground. Botticelli has emphasized just how sound asleep he is in a variety of ways. Most noticeably, we have the four little satyrs playing with his weapons.

In some readings of Botticelli’s Venus and Mars, the four boys are referred to as putti (chubby male children, often naked and with wings), in some as satyrs. Either way they are obviously mischievous and enjoying themselves enormously. One of the boys has crawled into Mars armor and is peeking out at us from under his arm, and the other three have picked up his lance, one wearing his helmet, one about to blow a conch shell into his ear. It should be noted that the armor and helmet that protects Mars was made by Venus’ husband, Vulcan. Oh the twist and turns this story takes. (Just after this moment in the myth Vulcan traps the two lovers in a net.)

Beyond the satyrs we also have wasps buzzing around Mars head. Personally, I think I’d notice wasps buzzing that close even if I was asleep, so I’m beginning to have doubts about Mars’ military skills. Surely a successful warrior should be a bit more aware.

Beyond indicating deep sleep, the wasps might also provide a clue as to who the painting was created for. The provenance of this piece isn’t known, but it is believed it likely commemorates a wedding, or was  a wedding gift commissioned by the Vespucci family.  Botticelli had accepted commissions from the Vespucci’s in the past, and they had been his neighbors when he was a child. Their coat of arms includes the wasp.

Actually, their name means ‘little wasps’ in Italian. Frequently in commissioned paintings, the family crest of the patron would be included in the painting. It is believed by some experts that instead of painting the crest in the upper right corner, Botticelli decided to incorporate a natural element that would serve the same purpose. Hence, there is a wasps nest hanging beside Mar’s head, a nod to his patron and a bit of a visual joke.

Beyond the real wasps there is the image of a wasp on the jewel that hangs around Venus’ neck, and with her hair forming a V we have another symbol of the Vespucci family. In fact, if you look closely at the painting you will find an incredible number of V’s, including the trim on Venus’s gown.

We sometimes think of Renaissance art as being very serious, but in Botticelli’s Venus and Mars we see amusement and humor. The satyrs, the snoring Mars, and the fairly disinterested Venus combine to create a painting of great beauty and a light atmosphere of fun.

Even though this painting shows the couple just after making love, Venus appears very demure and chaste, while Mars sprawls on the ground naked. This is another point in favor of believing this painting was a wedding gift. During this time it was believed that if a young bride (who would be chaste) gazed on male beauty she would be more likely to have male children or an heir, the goal of most Renaissance marriages.

What is with the legs? 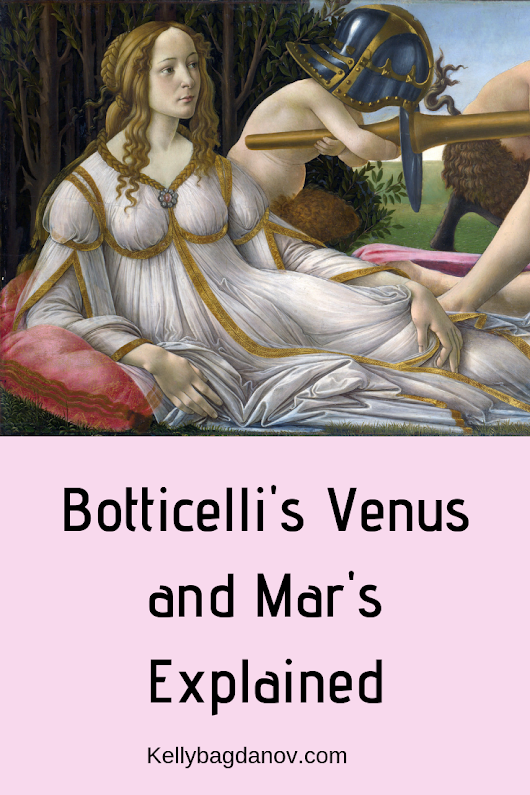 It should be noted that while we have a presentation of idealized beauty, the bodies we are looking at are not perfect. The dimensions are off. The leg of Mars that is raised is too short, and the position of Venus’ legs is unnatural, in fact, it’s hard to find her right leg at all.

Another characteristic of Botticelli’s art is the use of outlines. The outlines are easy to see on Mars body where the colors contrast. These lines give his figures a crispness and clarity that is unique. It’s fun to take a magazine photo and, with a very fine black tip pen, outline the face, arms etc. and note how it changes the image.

When my husband was reading this article we got into a debate about Mars’ legs. I think the top one is short, he thinks the bottom leg. At the very least I think the bent leg is a little strange looking. but it does seem the distance of the thigh might be longer. Let us know where you weight in on all of the legs in this painting. Is Venus missing a bottom leg? Are Mars’ legs mismatched? It was these inconsistencies that kept Botticelli out of the top rung of Renaissance artists.

While this painting is lighthearted Peter Paul Rueben’s painting The Horrors of War, takes an entirely different look at the relationship between Venus and Mars. In that painting Mars is clearly choosing war over love.

If you would like to examine another Botticelli work, the  Mystic Nativity is a fascinating painting fraught with danger and controversy,

If you’ve enjoyed this post you can check out other posts on Art essay kfc.

This video is a lecture on my homework now teacher login

Bruegel’s Massacre of the Innocents

Bruegel’s Massacre of the Innocents is a powerful political work. Deemed too dangerous to be displayed multiple scenes in the work were painted over to make them more palatable. The work visually recounts the Biblical story of the children of Bethlehem being slaughtered by King Herod.  Bruegel links the story to his own countries struggle