Frames and Pedestals, They Matter! 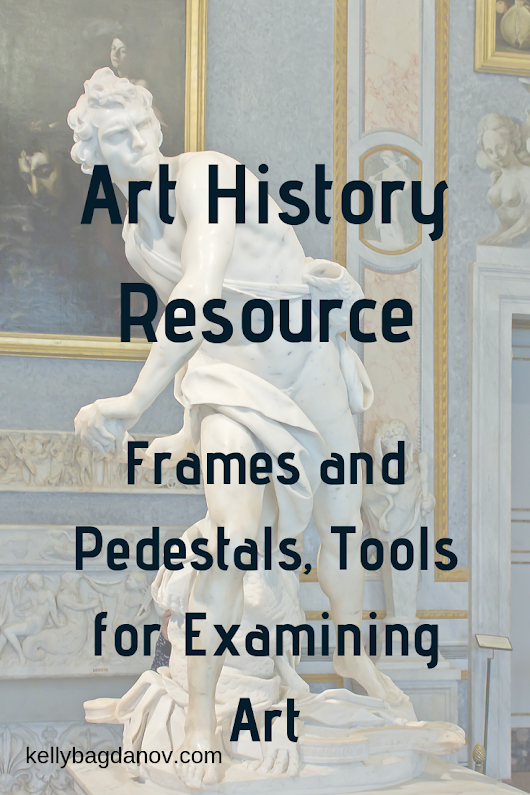 Frames and pedestals add to our first impression of a piece of art. Art is greatly influenced by how the work is displayed and by what surrounds it. Making the effort to consciously take note of these elements can increase our ability to read a work correctly.

A closer look at a few sculptures will illustrate just what I mean.

Before we begin to view a sculpture there are factors that influence our initial response. For example, a bronze statue of a child next to a fountain in a public mall is casual and approachable. However, a bronze sculpture carefully displayed and lighted in a museum assumes an elevated status. Where a statue is located and how it is displayed plays into how we respond.

I would be willing to bet, if we did an experiment, and moved a museum piece into a public park, most people would pass right by. It is just human nature.

Often works have been removed from their original locations and part of the viewing experience has been lost. Imagine the Great Sphinx of Egypt transported into a museum, would it retain the air of mystery that is felt seeing it in a vast desert?

To understand this further, let’s look at a work by Henry Jackson Ellicott.

One of the most celebrated Union generals of the Civil War was General Hancock.  40 year military career, Presidential candidate, and the admiration of his contemporaries; all are evident in his Memorial statue.  Sitting astride his horse he exemplifies a leader. No doubt, this impression would be there if his statue didn’t include an impressive pedestal, but the added height affects how we approach the statue.

The act of gazing upwards informs us that we are ‘below’ this man, that his stature and character are above us and are to be respected and honored. If we remove the large pedestal we will still have an impressive statue, but the addition of such a substantial pedestal re-enforces the message of the artist – this man is  untouchable. We must relate to this statue from a distance.

Let’s compare that with Rodin’s work of the Burghers of Calais.

I was recently at the Norton Simon Museum in Pasadena and had the opportunity to view this work. It is displayed outside, on the lawn in front of the museum.

As you can see the work is very approachable and invites the viewer in to observe these men closely. You can wander around the entire work and examine it from many different angles.

I felt more of an affinity with these men just by the way the work was displayed. I gazed directly into their faces. Even if I hadn’t known their story I would have felt their distress and pain.

The work commemorates an event during the 100 Years War. England’s Edward III had laid siege to Calais, and as the town was forced to surrender Edward extends the offer that if the town will send out 6 of its leaders he will spare the city. Eustache de Saint Pierre is the first to volunteer, eventually 5 more Burghers join him. 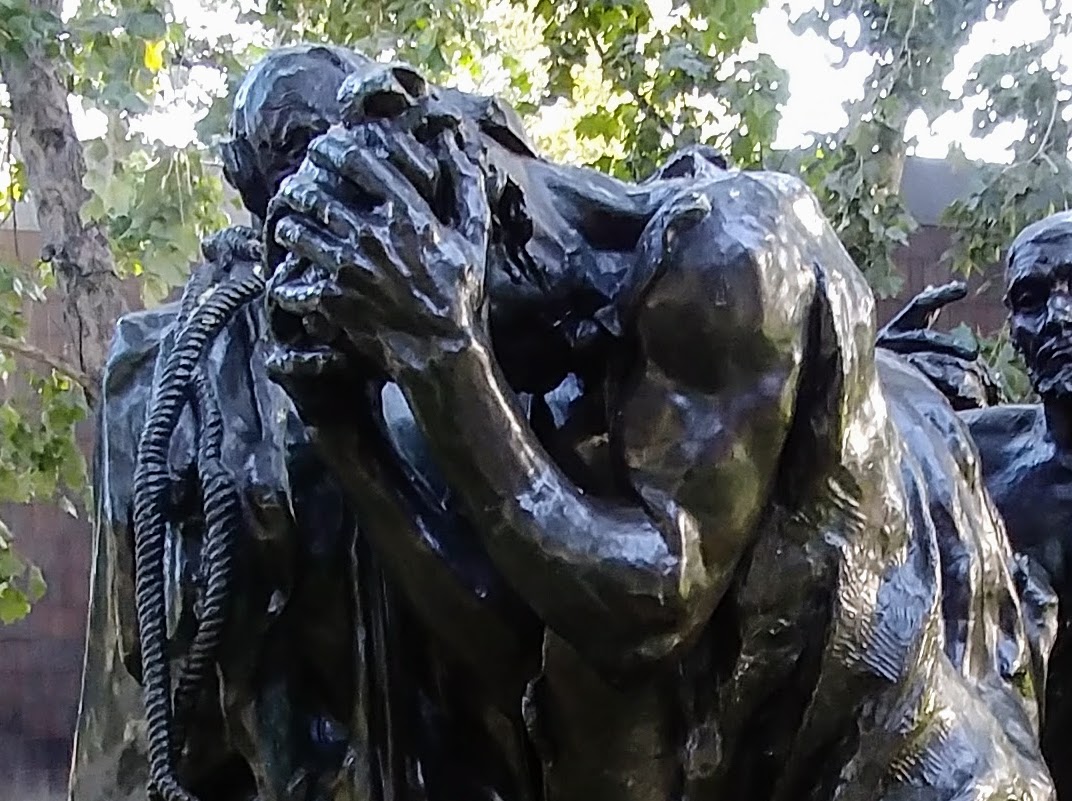 Rodin’s design was controversial because it didn’t show the 6 men in a classical, heroic posture, but instead captures them at the moment they are leaving the city gates headed to their deaths.

Looking at the men, being close enough to touch them, pulls you in. It is a very moving and disturbing sculpture.

The government of France wished to create a memorial of this event. The expectation when they awarded the commission to Rodin was that the finished work would have heroic references and contain allegorical figures.

Instead, Rodin wished for the work to be placed at ground level where people would have a close encounter with the pain and anguish of self-sacrifice. This created some controversy when the work was revealed, as the plan to display the work with no pedestal was unexpected.

Artists often make adjustments to works depending on where and how they are going to be displayed, and it is worthwhile to take note of these details when we are viewing a work.

Today, when we go to an art museum we see works protected, lighted carefully, and displayed in thoughtful groupings This was not always the case. Museums are a relatively modern conception. Historically most art was created for homes, public spaces, government buildings or houses of worship. The rooms that were to house a work were taken into consideration and often an artist used this to their advantage.

Often even the frames were designed by the artist to complement a painting. We see this in Michelangelo’s Doni Tondo, the painting is one work of art, the sculptural frame is another.

We are conditioned to respond to certain cues in our surroundings, and often are unaware that we are being influenced. When you have the opportunity to view works of art in person, a good first step is to take note of the surroundings of the piece.

Museum curators take great care when they decide which pieces they will display together and that should be considered as you roam a museum. Next time glance around the entire room and ask yourself why should all of these works be displayed as they are?

I’d love to hear your experiences with viewing art, have you considered how it was displayed? It was something I’ve only been considering recently.

I hope you are enjoying these art posts. If you would like to read more you can follow this link.

essay on qualities of a good citizen

Michelangelo’s Sistine Ceiling astounds with its beauty and complex theological messaging. In this post we will be exploring the meanings behind the various elements of the ceiling and how they all come together to support a common theme of reconciliation. I’ve already written about the drama and challenges Michelangelo faced when he was forced

Holbein’s The Body of the Dead Christ

Holbein’s, The Body of the Dead Christ, is a gruesome picture meant to shock. Confronting the viewer with such a realistic painting of Christ in the tomb, challenges the believer’s confidence in the resurrection and demands a greater degree of faith. Influenced by Humanism, Holbein shows us Christ most human moment, his death. Doctrine held