Holbein’s The Body of the Dead Christ

Holbein’s, The Body of the Dead Christ, is a gruesome picture meant to shock. Confronting the viewer with such a realistic painting of Christ in the tomb, challenges the believer’s confidence in the resurrection and demands a greater degree of faith. Influenced by Humanism, Holbein shows us Christ most human moment, his death. Doctrine held that Christ was fully human and fully divine, but religious art, even when portraying Christ crucified, still managed to render his divinity with a calm, dignified beauty.  Here Holbein strips Christ down to his humanity, and as Dostoevsky noted when viewing the work, “Such a picture might make one lose one’s faith.”

At the bottom of this post there is a link to my video on this work, if you prefer that format. 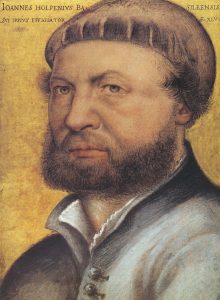 Who was Hans Holbein?

Hans Holbein the Younger was a Northern Renaissance artist whose works included religious art, satire, Reformation propaganda, and perhaps most notably portraits. Holbein’s portraits are responsible for how we imagine many of the prominent men and women of the 16th century. Erasmus, Sir Thomas Moore, Anne Boleyn, and Henry the VIII are just a few notable figures whose appearance is heavily linked to one of Holbein’s portraits.

Holbein was also noted for the portraits he painted of couples. Instead of posing them together on one canvas, he painted pairs of canvases, giving each figure their own space. Art Historian Ellis Waterhouse put it this way, Holbein’s portraits “remain unsurpassed for sureness and economy of statement, penetration into character and a combined richness and purity of style.”  Holbein sought to realistically portray his subjects, but also to let us into their inner worlds, to let us see their character and what made them unique.

While the Body of the Dead Christ is a religious painting, it is also a portrait of Christ. Holbein wants to reveal all of Christ to us. His works are noted for their realism, and perhaps nowhere do we see that more clearly than here.

The influence of the Isenheim Altarpiece 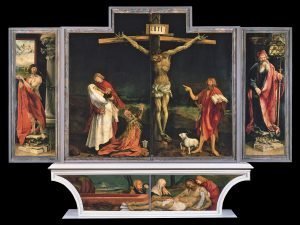 Holbein’s father, Hans Holbein the Elder, was a late Gothic artist and had instilled in his son the aesthetic of the late Gothic style. He took Hans to see another Gothic work, the Isenheim Altarpiece by Grunewald.  The macabre painting left a lasting impression on Holbein and he draws on that inspiration here. The decaying skin, the tortured body, and brutal reality of crucifixion are amplified in each work.

For Grunewald the point of his graphic depiction was to provide hope that the world has a redeemer who understands suffering, displayed in a hospital that largely treated the dying, Grunewald hoped his painting would bring comfort.

Holbein’s aim appears to be different and influenced by the philosophers of his day.

Holbein lived in Basel, the town where Martin Luther’s Protestant works were printed. Additionally, he was exposed to the writings of Erasmus and Sir Thomas More, and would, eventually, paint their portraits.

During the Northern Renaissance, Christianity and Humanism began to merge and became known as Christian Humanism. Before the Renaissance the church focused on the divine aspects of Christ’s life such as his miracles and resurrection. When pictures of the crucifixion were painted, Jesus still retained a certain beauty consistent with his divinity.

Christian Humanism shifted the focus to the humanity of Christ and focused on the mortal man, his teachings, relationships, and experiences. Part of this shift was seen in art as artists began to emphasize the horror of the crucifixion, and what Christ would have experienced bodily. These works showed a very human man twisted in agony, rather than a divine being who endured the cross. We were meant to see the ultimate and personal cost of Christ’s death.

My first thought when I saw this painting was the dramatic shape. The work is only 12 inches high, but 80 inches long. The shape contributes to the claustrophobic, disturbing feel of the work. We feel we are in the tomb with Christ. I want to back away.

It’s not known if the unique shape was Holbein’s choice, or if it was dictated by where the painting was to be displayed. It’s possible it was going to be used on the predella (bottom) of an altarpiece, or perhaps as an ornament for a sepulcher. Either of those options might have pre-determined the dimensions. Personally, I like the idea that this was a free standing work, and that Holbein chose the shape to intensify the feelings evoked.

This is not the usual, peaceful, beautiful, dead Christ  This is a gruesome image of a dead man with gaping mouth and eerily open eyes staring off into nothingness. (or into heaven, depending on your interpretation). The hair dropping over the table seems to break through the surface of the painting and come toward us. There is nothing attractive in this rendering.

Christ’s face is just the beginning of the grotesque depiction. The realism is expressed in the wounds on the body starting to putrefy; the skin stretched unnaturally over the protruding bones unflinchingly depict a tortured, dead body. We know that Holbein used a dead body that had been fished out of the river to serve as his model. 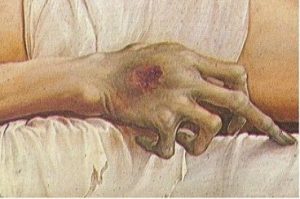 Perhaps the next thing to catch the attention of the modern viewer is the extended middle finger of Christ’s hand. I can imagine Jr. High students wanting to believe that Christ is flipping off his executioners. That is not the case.

In medieval iconography the number 3 is significant in a number of ways. The middle finger is the third finger. It is believed that Holbein emphasized this finger, having it extend and fall off of the table to remind us that in three days this dead body will be resurrected. All of the rotting flesh, the empty corpse of what was once was a living man will be rebirthed, brought back to life, whole and incorruptible.

There is an inscription on the frame of the work that in Latin and reads, Jesus of Nazareth, King of the Jews. This echoes the sign placed above the cross as expressed by the gospel writers. Additionally, although very hard to see in reproductions, are angels that are holding instruments, or items that reference elements of Christ’s Passion (or suffering).

The Russian author Fyodor Dostoevsky viewed the painting in 1867, when he visited the Basel Art Museum. He describes having such a strong emotional response to the work, that he found a chair, moved it in front of the painting and climbed up for a closer look. In a museum, can you imagine?

His response was so intense, that his wife became concerned. She reported that he turned white and refused to leave, she dragged him away concerned that his heightened emotions might bring on an epileptic fit. He later remarked that, “Such a picture might make one lose one’s faith.”

Dostoevsky’s work, The Idiot, is believed to be his most autobiographical. In this book he includes a copy of Holbein’s painting in the home of character who is an atheist. The main character, Prince Myshkin, who most critics believe Dostoevsky based on himself, sees the work and philosophical conversations on the nature of faith ensue. References to the painting surface several times during the course of the story, a testament to the lasting impression the painting made.

The Role of Doubt in Faith

Dostoevsky was a deeply religious man who believed confronting our doubts was an integral part of faith, and after viewing The Body of the Dead Christ believed Holbein would agree with him.  The idea that this painting had the potential to destroy or strengthen someone’s faith is not a contradictory concept.  Dostoevsky believed that faith wasn’t bolstered by finding evidence for God, but in believing despite the evidence against the gospel story.

That helps explain Dostoevsky’s response to this work. The depiction of the dead Christ is so realistic, so jarring, that it is a challenge to one’s faith to continue to believe in the resurrection. Our eyes and our experience with death tells us that death is final, there can be no reversal of death to life.

I have a Dostoevsky quote painted on a wall in my house that says, “Believe to the end, even if all men went astray and you were left the only one faithful; bring your offering even then and praise God in your loneliness.”

Concluding Thoughts on Holbein’s Body of the Dead Christ

Holbein’s, The Body of the Dead Christ, is a difficult painting to ignore, the image elicits an emotional response in most of us, no matter what religious views we bring with us to the work. For the atheist the painting disproves the claims of a resurrected Christ, for the doubter the work has the potential to amplify their doubts, and for the faithful the painting brings reflection on the cost of salvation. Personally, I think on everyone’s spiritual journey there are times of faith, times of doubt, times of disbelief, and times of great conviction; this work has something to say wherever you find yourself.

El Greco’s Cleansing of the Temple

El Greco’s Cleansing of the Temple (1600) is a cautionary work, admonishing the Church to remember that money, power, and politics can be corrupting influences, El Greco paints a dynamic picture of Christ brandishing a whip of cords as he moves through, what should be a house of prayer, but has become a den of

Giorgione’s Adoration of the Shepherds

Giorgione’s Adoration of the Shepherds exemplifies the distinctives of this Venetian artist. In this work his penchant for enigmatic themes is fully expressed as he paints Christ as the Eucharist and Mary as the Altar. Surrounded by the evocative landscape we have the shepherd’s arriving to worship the baby Jesus and learn from Mary. As