Festival of Lights in Amsterdam

During the long, cold winter months of December and January a magical Festival of Lights takes place in Amsterdam. Lighting the city with enchanting art installations, the city twinkles and glows, giving light and warmth to both citizens and visitors, during the darkest months of the year.

20 to 30 works of art are selected each year and installed along a route through the city. Visitors can take a walking tour, or view the installations from a boat on the canals.

In 2013, Company New Heroes created a project for the Festival of Lights. Instead of an artist, or group of artists creating a light installation, New Heroes artists, Pascal Leboucq and Lucas De Man asked the people of Amsterdam to participate in their project by donating lamps from their homes. The artists provided the initiative but the people of Amsterdam would ‘create’ the artwork. 1,100 lamps were donated.

The lamps reflected the people who donated them, old and new, modern and antique, with no two exactly the same. The lamps and their endless cords created a river of light through the dark night. Some of the lamps had shades, others stood as bare light bulbs. If you examine the photographs of the installation you will likely find a lamp quite similar to one you or your family have owned. 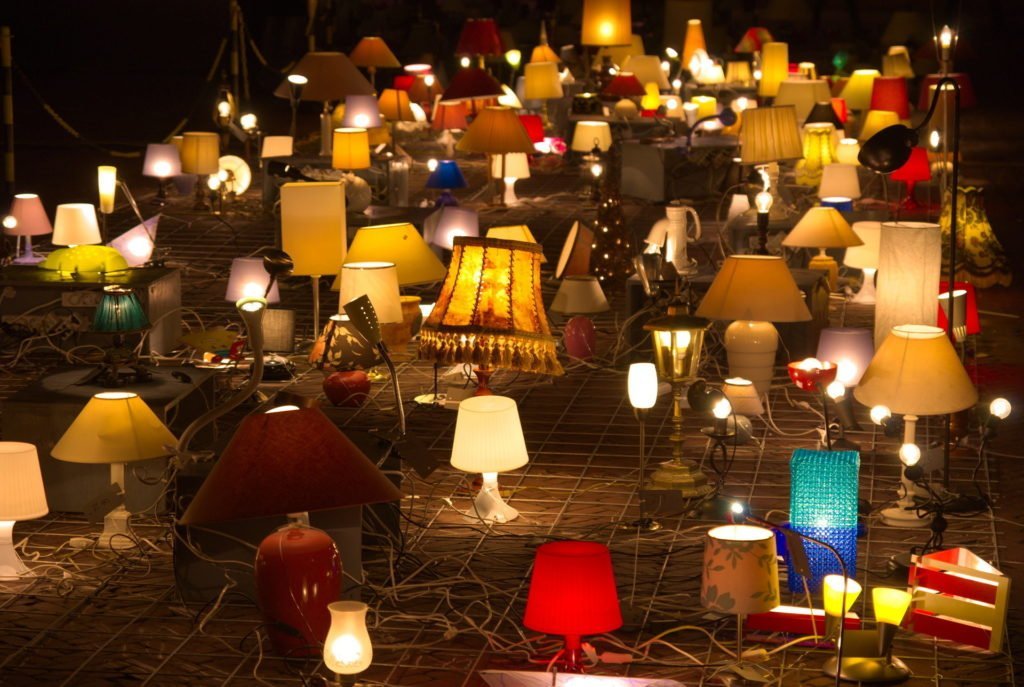 Oddly compelling, the higgledy-piggledy arrangement of lamps invites us to move closer and consider the artists intent. Each lamp is quite different from the one next to it and exists in it’s own space, while also being an integral part of the whole. In this river of light each lamp contributes it’s glow and creates something beyond itself. Whether small and insignificant, or grand and rich looking, all of the lamps play their part.

All of the lamps are arranged on the ground and were observed by those walking alongside them. However, there was a ladder that visitors could climb so the work could be viewed from above. It was only when changing the viewers location that another element of the work came into focus. The lamps formed the words, “We light Amsterdam.”

The phrase “I Amsterdam,” was well known in the city. A famous sign was placed outside the Rijksmuseum in 2004. The sign has recently been removed, but was originally part of an ad campaign. The sign was created as a symbol of inclusion which celebrated Amsterdam’s diverse population.

The message of the light display expanded on the original idea and changed the messaging to the even more inclusive pronoun, we. From above the display read, “We light Amsterdam” and the people of Amsterdam literally lit up the display through their donations and participation in the project.

I find we often feel protective of our individuality, our space, and our importance. Perhaps we fear that validating and celebrating everyone, young and old, male and female, rich and poor etc. will someone limit and contract our own world and influence. This work seems to counter that self-protective train of thought. Instead of becoming less, joining together with others enhances and expands our own stories. In a world that seems determined to divide us, I find this river of lamps encourages me to join together with the larger community, to pull in those who are often overlooked and include them. In our stream of lamps it’s been noted that even when a light bulb went out, the lamp continued to live on because the lamps around it kept it visible.

As the weeks of the display went on, the artists would check in every few days to see if cords were still connected, and light bulbs were still working. Moving amongst the lamps as caretakers they maintained the source of power that kept the lamps shining. In this case the role of the artist was one of inspirer, initiator, and caretaker, but it was the community of Amsterdam that contributed the elements and the power that created this moving piece of art.

While this project was about Amsterdam and creating a urban work, I came across its existence through an Advent post on ArtWay.eu in an article by Jose Verheule. (linked below)

As we are moving into both winter and Advent I found this work compelling. One of the great themes of Advent art is light, and for the past few Advent season I’ve created Advent Devotionals around various works of art. This year I found myself drawn to the idea of light coming into darkness as I considered this pre-Christmas season. I found myself looking for works of art that highlighted ‘light’. Hard to beat an entire Festival dedicated to bringing light into the dark of a Northern winter.

So, this season I will be kicking off my devotional by digging a bit deeper into the ideas this work raises.  If you would like to follow along this Advent Season make sure that you are subscribed to my email list. Each Sunday of Advent you will receive an email with that weeks devotional.

The group that put together this display, New Heroes, uses multidisciplinary storytelling to connect and inspire conversations that question value systems based on infinite growth, and instead promotes values and systems that focus on people, nature, and the vulnerable. The shift they are seeking to facilitate is one that moves away from domination and toward full participation by all members of society The art installation we will look at today embodies these values and, on multiple levels, challenges us to consider our place within ourselves, our families, and our communities.  You can read more about them here.

The original article, “We light Amsterdam” can be found gladiator movie summary essay.

small essay on corruption in india

write essay for me

Jacques Louis David’s Oath of the Horatii defines the Neoclassical painting style. Creating a sensation due to its striking aesthetic, the work soon became a rallying point for the French as it embodied the ideals and vision of the Revolution. Jacques Louis David David was a classically trained French painter who is most noted for

Rembrandt’s Dream of Saint Joseph emphasizes Joseph’s connection to the Joseph of the Old Testament, and to his role as the Saint of Hidden Things. Additionally, this work makes us reconsider the customary image of the sleeping Joseph. This painting is one of several that Rembrandt made of this story and I find it refreshing