The iThemba tower, is a permanent public art installation that symbolizes the collective hopes of the residents of Troyeville in Johannesburg, South Africa. The tower is over 65 feet high and is made of over 7,000 plastic bottles on a redundant communications tower.

Bringing attention to the informal waste collectors of Johannesburg, and the problems associated with single use plastics, the project has grown and morphed into a hopeful spire filled with the hopes and dreams of a community for a better, cleaner future.

IThemba comes for the isiZulu language and means trust and hope and the name sums up the purpose of this piece.

The Origins of IThemba’s Hope.

r1 is a street artist who uses found materials to create public art that encourages engagement between the diverse people within the community. He happened to meet Thomas, who lived near the communication tower, under a tree next to the local highway.

The artist, r1, said, when asked about why he wanted to do this project with Thomas. “I wanted Thomas to be able to give a new connotation to the junk he collects, and to his life, which it represents. I wanted him to be proud of it.”

Originally, the work of art was just the plastic bottles going up the base of a communications tower that was no longer being used. Once part of the tower was covered, there was a push to cover the entire tower with bottles and an expanded project was under way.

As the scope of the installation grew, so did the people and organizations that contributed. Local residents, school children, business, and the informal waste collectors collaborated to create a tower that combined light, messages, and bottles. Multiple themes emerged as the tower grew and took shape. 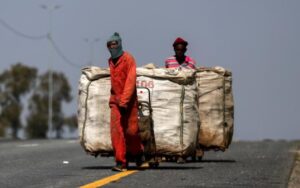 Hope for the Informal Waste Collectors

Thomas’ story is uniquely his own, while simultaneously being echoed throughout the large metropolis of Johannesburg. In his case, this included homelessness, but this is not true of all of the waste collectors. His days are long and the pay is minimal.  By participating in this piece of art, the collectors were able to tell their stories, and to explain the important role they play in the city.

In short, the project humanized their stories, recognized their contributions, and gave back the dignity that many had felt stripped of. R1 believes the project breaks down existing boundaries within the community and inspires people to work together to create something beautiful. By the end, artists, grassroot community members, and business would join forces and address the problem of plastic recycling in Johannesburg.

Hope for the Earth

Single use plastics are the most prevalent form of pollution on the planet, and this is especially true in disadvantaged communities. One bottle can take 500-750 years to break down in a landfill. 250,000 bottles are dumped every hour in South Africa. (2.5 million plastic bottles are thrown away every hour in the U.S.) The sheer mass of trash is staggering and very little of it gets recycled.

The work of the informal waste collectors diverts 16-24 tons of plastic annually from the landfills in Johannesburg. This saves the country 48 million dollars’ worth of landfill space each year, while also saving the environment the added burden of unrecycled material. It is estimated that 46% of plastic bottles are recycled in South Africa, compared to 31% in Europe. This is largely due to the work of these men and women.

“Every city has a beauty and I believe there’s something special about the streets of Johannesburg. Every night informal waste collectors clean the streets and so we never really fully see how much litter fills our gutters,” r1 said.

So, when the decision was made to cover the entire tower, the message of the tower was taken into the local school.

The school decided to begin a campaign to educate students on the problems of plastic waste and to empower them to make a difference. Students learned about the excesses of single use plastics, the effects on the earth, and the role recycling can play. The Informal Waste Collectors came and shared their stories and answered questions.

Then, the students wrote out a message of hope that was tied with a ribbon and placed in a plastic bottle. This began the process of filling the tower with the collective hopes and dreams of the community. More people were encouraged to write out messages, and as these missives arrived, they were added to bottles. Today, each bottle in the tower contains a note from an individual in the larger community, and those single wishes unite with the others to transform an old, unused communications tower into a beacon of hope.

Of course, in order to be a beacon, light was needed. The project collaborated with Bushveld Labs, a design and engineering consultancy company to assist with the LED light installation. Now the tower shines its light across the neighborhood, bright against the night sky.

“compare and contrast essay examples college level“ is an agency in South Africa that works to connect creative talent with brands and the larger community. They publicized the project and invited people to join in by contributing funding and writing their own messages of hope. As funds and messages came in the tower of hope grew.

What started with one artist and one informal waste collector, expanded to include other waste collectors, then a school, then the community of Troyeville, and finally the country of South Africa. This is the very heart of art, to speak a message that spreads, creates conversation, and in some cases brings about change, both in individuals and the larger community.

The Garden Provides an Area to Nurture Hope

The iThemba Tower is located in the Spaza Art Gallery, which is a community art garden in the center of Troyeville. Troyeville is an often-overlooked community in a disadvantaged area of Johannesburg. The Spaza garden was created as a space for creatives to work, collaborate, share and sell their creations. Now Troyeville and the iThemba Tower bring visibility and unity to an ignored neighborhood.

Artist as harbinger of Hope

I’ve mentioned the artist r1 as the initiator and visionary behind this tower.  “The essence of his work is to develop site-specific art pieces in public spaces, to create visual conversations with residents and the general public.” (essays on customs and courtesies army)

I encourage you to learn more about his art and the interplay between street art and the public which can help break down boundaries and create united communities of diverse individuals.

A Message to Take Forward

The problem of plastic is one I have struggled with for years. I’ve struggled with how I can personally address issues of poverty, or be an ally to those who are marginalized.  This communication tower reminds me that often a start is a conversation. Hope can be found when we listen to one another. When we listen to others stories, we give them a validated space. This is particularly important to those who are living on the edges. When we listen, we recognize our common humanity and that we all have hopes for our futures. When we listen, we acknowledge that we all call the earth home and that caring for it and each other is our common responsibility.

Hope, the iThemba Tower, and Advent

I’ve included the iThemba tower in an Advent Devotional that I’ve written for the 2021 season.

Christ’s arrival brought about religious changes that some were not ready for, frankly that many are not ready for today. His message was one of radical inclusion, of traveling to the edges of society, and of offering hope to the hopeless.  In the book of Genesis, the first in the Bible, we are told that God created man in his own image. In Jesus we find a man who modeled for us what it means to see God’s image in each and every person, to recognize their inherent worth and to love them without conditions.

If you would like to read more, you can find the devotional here.

And if you would like to explore another work of art that delves into the topic of the image of God you can head to my post on Harry Watrous’ The Drop Sinister.

The Annunciation by Titian is one of the artist later works displaying his innovative loose brushstrokes and dramatic lighting. Containing more of the heavenly realm than the earthly, Titian alters the traditional Renaissance envisioning of the story. Who was Titian The Venetian master, Titian was born Tiziano Vecelli. He was an Italian Renaissance painter

Hugo Van Der Goes’ Portinari Altarpiece, was shocking when first revealed to the public. The unprecedented portrayal of the shepherd’s amazed viewers and emphasized Van Der Goes theme of humility. A monumental work that challenged both the art world, and the individual, to reconsider what is truly important. This work stands as a testament to

Enrique Simonet’s Then He Wept depicts the Biblical story of Christ standing on the Mount of Olives, overlooking Jerusalem and grieving for the city. Intimate and moving, the composition invites us to join Jesus followers on the mountain top and listen as he laments.  Christ’s grief is prompted by the disbelief of the Jewish leaders